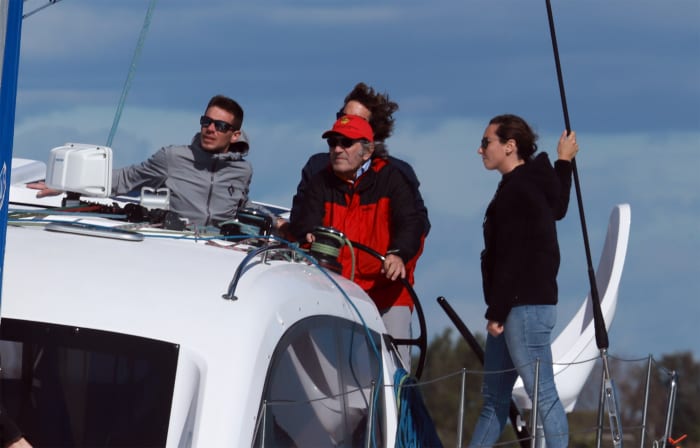 Famed bluewater cruiser Jimmy Cornell has been forced to abandon his latest circumnavigation due to power-generation problems aboard his carbon-neutral catamaran.

“In my long life I cannot remember ever abandoning a promising project, and it is very painful to accept failure now,” the 80-year-old Cornell reported. “But I am a fatalist and whenever I am faced with such a situation, I simply accept it and move on.”

Cornell, author of the best-selling book World Cruising Routes and founder of the ARC, said the first stage of the voyage, which began in La Grande Motte, France, in late October “showed up some of the weaknesses of the regeneration system when it failed to keep up with the overall consumption on a proper voyage, not during a test in calm waters.”

According to Cornell, the hope was that the stronger winds and higher speeds on the second stage of the trip would allow his hydro-generators to keep up with the demands of systems like the boat’s autopilot and electric winches. But it was not to be, despite the relatively high speeds he was able to achieve aboard his Outremer-built cat.

“I decided to blame the disappointing start on the capricious Mediterranean winds and weather, expecting to fare better on the subsequent 700-mile passage to the Canaries,” Cornell said. “Having learned the lessons of the previous passage, we did our best to keep electricity consumption to the minimum. I kept a detailed record over this entire passage, [but] the results were consistently and disappointingly the same.”

Cornell’s voyage, which he had dubbed the “Elcano Challenge” had two major goals: to commemorate the 500th anniversary of the Magellan expedition’s successful first-ever circumnavigation and the Basque navigator who made it possible; and to show it is possible to undertake a major voyage like this one without having to burn a drop of fossil fuel. Cornell also hoped to draw attention to the many environmental challenges currently threatening the world’s oceans.

For more on the voyage, and Cornell’s decision to return with the boat to France, click here.

For more on Cornell and the full story of his Elcano Challenge, click here.

SAIL magazine also recently spoke with Cornell about the voyage as part of its “Point of SAIL” podcast program.