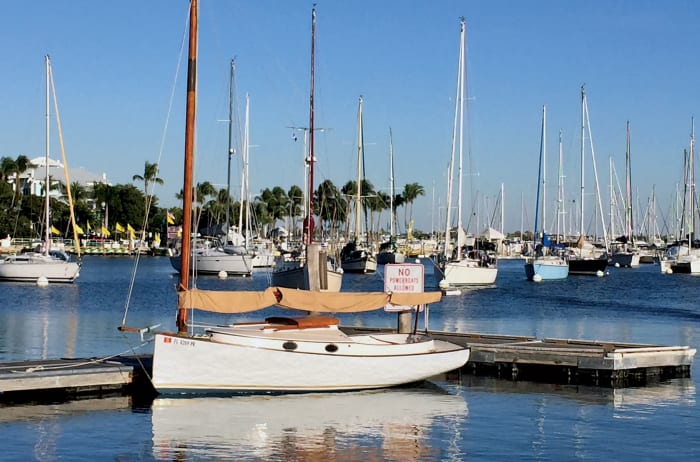 Quiet. That’s what you hear as you back away from the mooring. No chug, chug, chug from the diesel as water cascades out of the exhaust. Just a slight whirring as the boat smoothly glides in reverse. A twist of the throttle and the boat moves forward with the most notable sound being the wake proceeding astern.

This is how Betty Jane, my 1982 Mystic 20 Catboat, sounds now that she has had her combustion engine replaced with an electric motor. She was built as #50 out of 52 fiberglass catboats designed by Peter Legnos. She originally had an inboard diesel with a three-blade fixed prop sitting just ahead of the rudder. At some point, the diesel died, and her owner first removed it and then affixed a 6hp outboard to her wineglass transom. This is how she was outfitted when I acquired her two years ago.

After sailing Betty Jane for six months, one of her gaff jaws broke, a sure sign it was time to take her off her mooring and perform some much-needed renovations. I, therefore, trailered her to my house, parked her in the yard and set to work. The first step was to take the offending outboard off her transom, or as one sailor put it, remove the “wart off her ass.” After that, out came all of the remaining diesel accessories she was still carrying, including the tank (still half-filled with years-old diesel), the water muffler, the water intake lines, the diesel lines, the throttle and all the electronics.

With help from Rob Feaster and John Duffy of Miami, Florida’s, Centerline Marine, I also removed the through-hulls for the water intake, exhaust and cockpit drains, after which the cockpit drains were rerouted to the top of the centerboard trunk. All other through-hulls and openings in the cockpit were fiberglassed over. Betty Jane now has only the centerboard slot, the propeller shaft and the rudder post below the waterline—no other holes in the hull.

I investigated a number of electric-motor options for Betty Jane, finally deciding on a system from Annapolis Hybrid Marine that includes a 48V Thoosa 5500 motor from Clean eMarine with a properly sized drive belt and four 12V thin-plate, lead-acid sealed AGM batteries. The system also employs a 120V battery charger, a motor controller with a smooth circular throttle and a battery monitor. In addition, a 48V to 12V converter is used to charge the 12V house battery, and four Sunbeam 38-watt solar panels and a Victron MPPT controller are used to maintain the batteries while Betty Jane is on her mooring.

Once the fiberglassing was complete, I cleaned and painted the entire bilge (since the new engine system would no longer be leaking diesel or oil), while Rob and John designed and built a battery platform and engine mount out of StarBoard-brand marine-grade structural plastic. After that they removed the propeller shaft, stuffing box and propeller and had them all refinished. These were then reinstalled, and the propeller shaft aligned with and connected to the drive shaft of the new electric motor.

With the motor in place, the next step was to install the four batteries, which Damian from Quality Mobile Marine, of Coral Springs, Florida, wired in series. Damian also wired together all the rest of the system’s many components, which like the house battery were all installed in the port-side lazarette (the “dry” side, as opposed to the “wet” lazarette to starboard, which is used for lines, fenders and an extra anchor).

With the new installation, the cockpit is much less cluttered, with only the circular throttle and a 120V shorepower connection. The starter key and battery monitor are belowdecks in the small cabin next to the house-system breaker board. To turn the system on, the house and motor switches and key are all turned on. A button on the motor controller is then depressed and Betty Jane is ready to go. By turning the round throttle forward, the propeller engages (with instantaneous torque as any electric-car owner can attest), after which the farther forward the throttle is rotated, the more thrust is generated. Same thing in reverse. Simple, effective and intuitive.

Fully charged, the batteries provide many hours of motoring at half throttle with more than enough juice to bring Betty Jane home from just about anywhere on Biscayne Bay. I typically only use the motor to leave the mooring and get out to open water. Once there, the throttle is placed in neutral. With enough boatspeed, the propeller can also be used as a water generator to provide the batteries with a bit of a boost. After an enjoyable daysail, the engine can be used to navigate through the mooring field back home and pull up to Betty Jane’s mooring.

Other benefits to the system include no more oil changes, no fuel costs, no worries about water intake, impellers or the many other little concerns that are inherent in the use of a combustion engine. There’s just smooth, quiet acceleration whenever needed with little fuss. Isn’t that the way everything out on the water should be?

All photos courtesy of Tom Champney