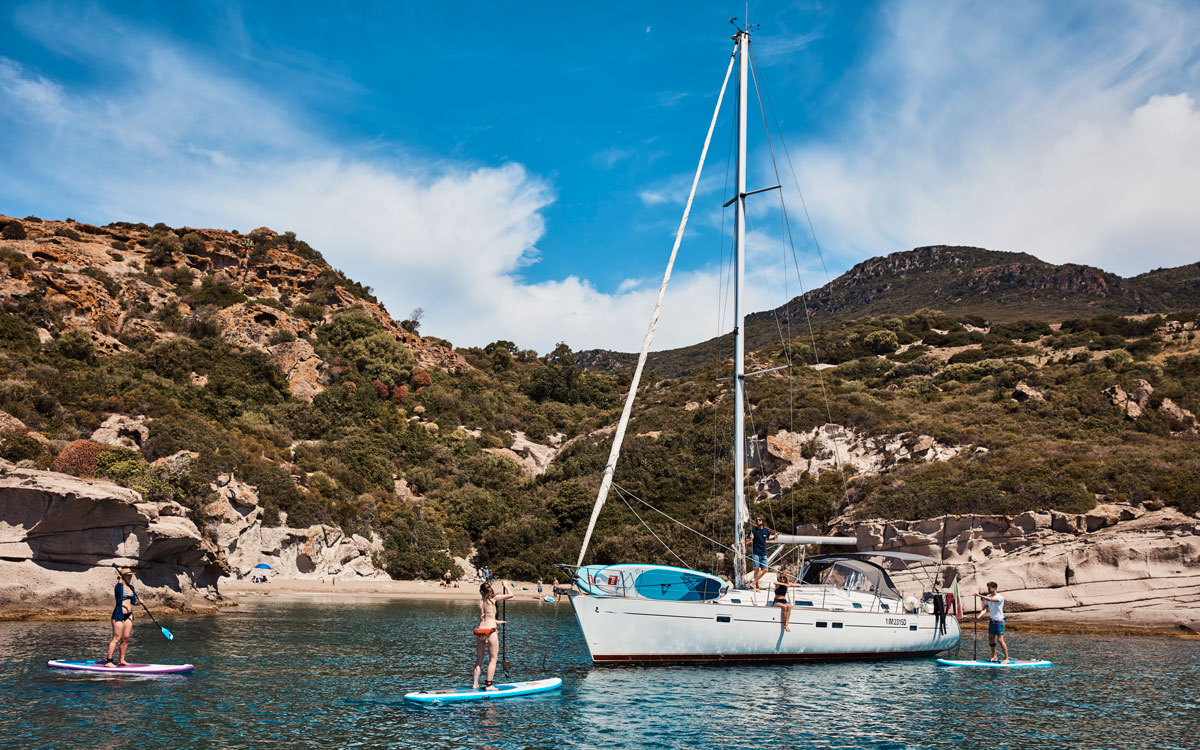 What should be on your hit list of fun gear to help maximise your time afloat and at anchor? Toby Hodges explains the burgeoning appeal of stand-up paddleboards and examines a few alternative inflatables 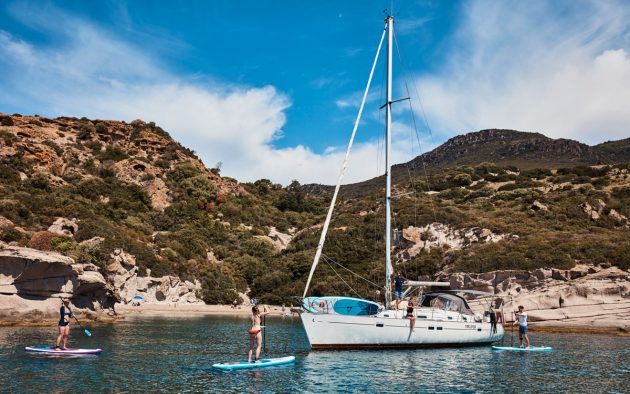 An inflatable paddleboard can transform your time at anchor

The advent of high-strength PVC inflatables and high-pressure pumps has transformed the world of marine toys. The variety of inflatable stand-up paddleboards, kayaks and windsurfers is getting all ages afloat with a minimum of fuss.

The best tender/toy you’ve never had – granted, that sounds like a bold claim to make, but anyone who has tried any of the good quality inflatable stand-up paddleboards on the markety knows that there is no looking back. These blow-up stand-up paddleboards are one of the biggest game-changers in recent years for cruising sailors at anchor/leisure.

Why? After a season of trying one, I can safely say the reasons keep growing! For starters, once inflated, stand-up paddleboards immediately create extra deck-cum-pontoon space. So for lazy summer days it’s perfect for families to use as a base from which to swim and jump or board the yacht, to check the waterline or to scope out an anchorage. 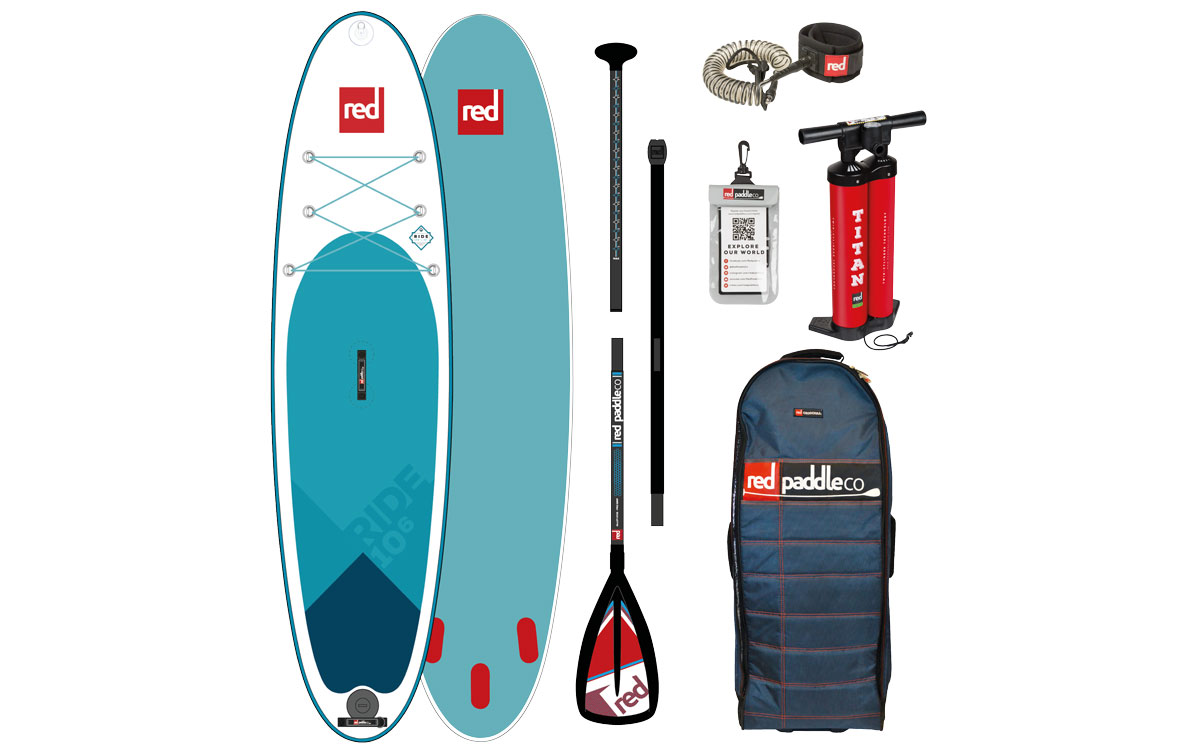 For use as a tender, a stand-up paddleboard is obviously hampered by its low freeboard and payload capacity. But for shipping waterproof items to the beach, an esky, kids, etc. it does the job with a lot less fuss than blowing up a RIB and rigging an outboard.

Then there are the fitness and independence benefits. To wake up, creep off the boat, and silently paddle off for some exercise at sunrise is liberating. I’ve also taken this 10’6 Ride – the world’s most popular inflatable stand-up paddleboard model – fishing, using a telescopic rod in a waterproof rucksack. I’ve also tried it in surf – though don’t expect to go down the line and carve: soft, rounded rails and plastic fins mean your body will try to go one way and the board won’t necessarily follow.

Perhaps the greatest appeal of an inflatable stand-up paddleboard, though, is for parents of young children. dinghies can seem alien to the young. But give them an inflatable paddleboard, something they can’t hurt themselves (or the topsides) with, and watch them become veritable ducks to water. In an instant, small kids literally cannot get enough of being in and around the water. 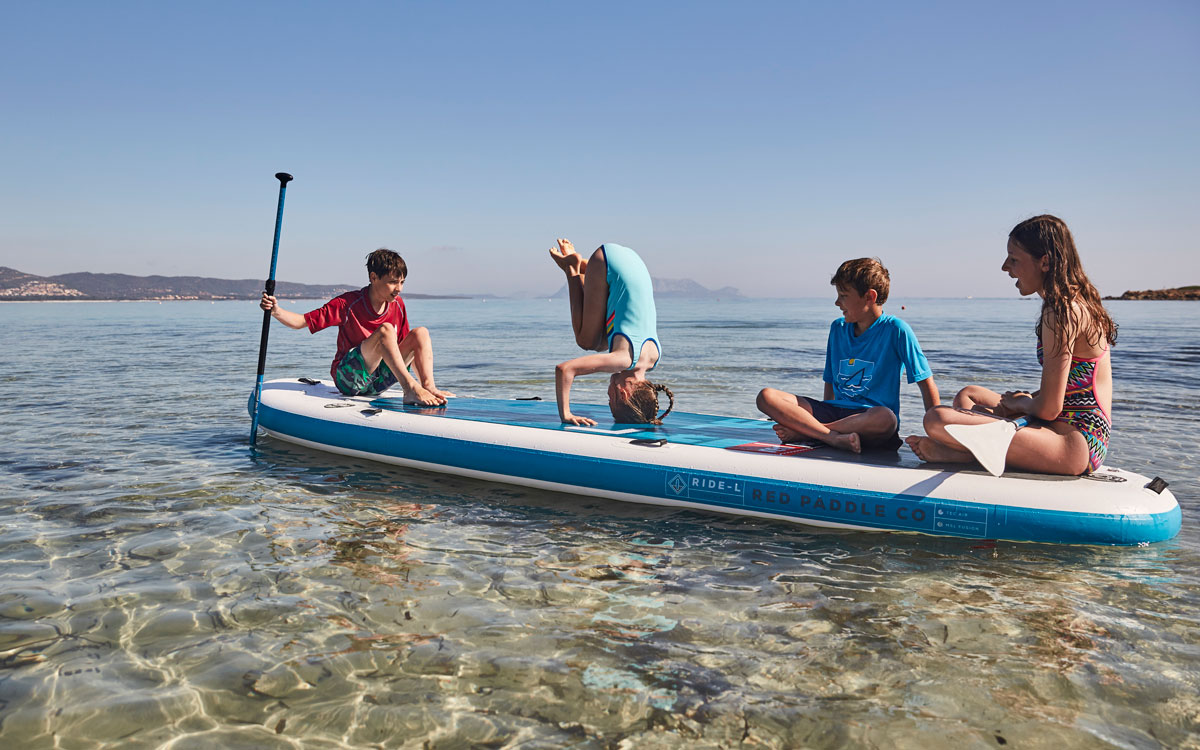 The best investment for parents of young children…

As a parent, it is intensely satisfying to witness and, for that reason alone, I cannot rate this product highly enough.

The quality of the stand-up paddleboard is commensurate with how much use you will get out of it. Red has been in the business for ten years and arguably has the best reputation for the stiffness of its boards, its superb pumps and carrying cases. I’ve tried cheaper, less stiff alternatives which result in more of the banana shape you might expect from an inflatable when you step onto it.

Red’s secret lies in its Monocoque Structural Laminate (MSL) Fusion technology. It creates a laminated layer on both surfaces to offer the stiffness of a double-layer board with the comparative lighter weight of a single layer type. There is a Top Gear-style video series of Red lab-testing a 10’6 board, including firing paint balls at it and driving a 22.5 tonne digger with caterpillar tracks clean over one.

The deck pad is robust and comfortable for bare feet and the integral bungee tie-downs on the bow are, handy for strapping a bag/barbecue/child in place. Red’s Titan twin-chamber pump is superb. It allows you to quickly pump in around 10-15psi pressure, before switching to a single chamber for the final, crucial extra pressure.

Five minutes pumping on the foredeck and your stand-up paddleboard is ready to go. The wheelie rucksack makes it easy to pack away the board, three-part paddle and pump and keep it in a locker or in the car boot. Yes the Ride is expensive – but you’ll quickly get your money’s worth in fun.

Note: We may earn a commission when you buy through links on our site, at no extra cost to you. This doesn’t affect our editorial independence 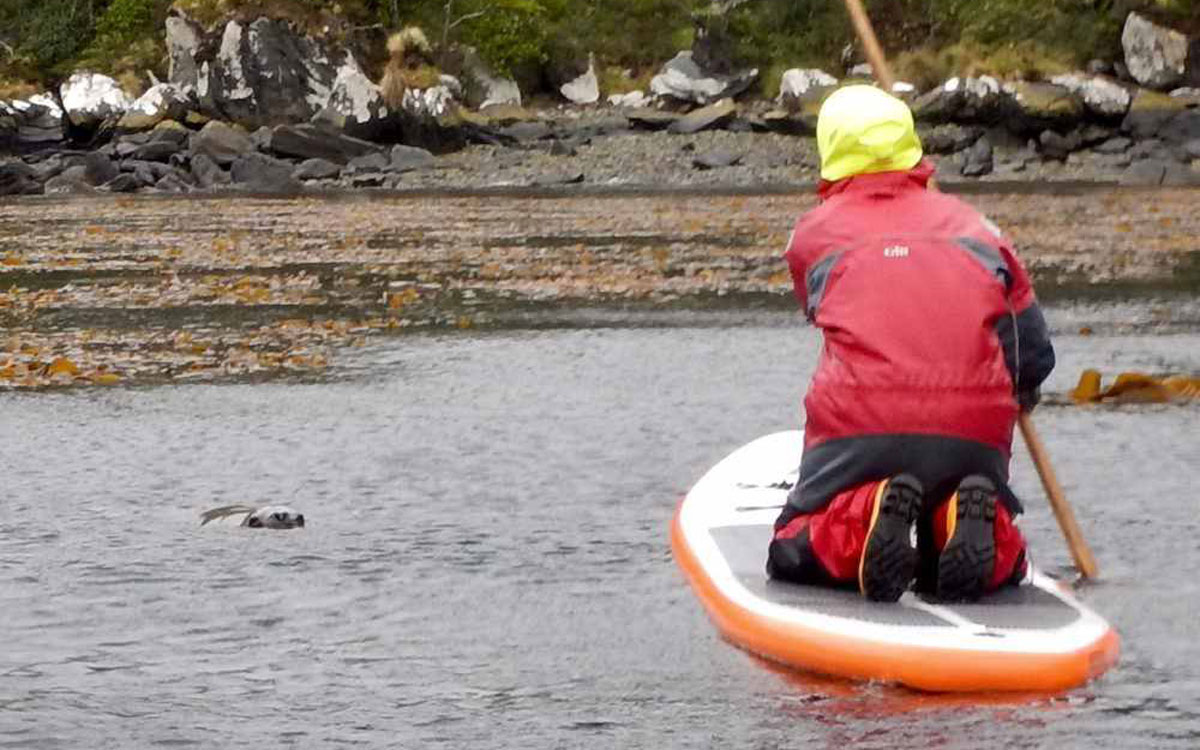 Using a stand-up paddleboard as a second tender

After the demise of his previous dinghy in Lanzarote, Aleko Stephan used a stand-up paddleboard as the primary tender aboard Beduin, a Nicholson 32, for a voyage to the west coast of Chile via the Magellan Straits and Beagle Channel. “At first everyone laughed at me,” he says, “but when they saw how good it was they also started to buy paddleboards.”

“It’s good to have a board with lots of buoyancy – at least 10cm deep – and a longer one: mine is 3.85m (12ft 8in). It will take two people, and I have used it for carrying anchors in the Patagonia Canals, as well as provisions and up to 70lt of water and diesel.”

Alternative inflatable toys – the best of the rest 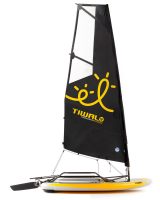 The Tiwal stows into two compact bags and can be launched, assembled and sailed in 20 minutes.

It uses the same high-strength PVC material as inflatable paddleboards, but an alloy structure gives it a backbone and allows the helmsman or crew to sit out. The carbon mast splits into four.

The latest models are more streamlined, practical and comfortable and hiking rack pads are on the accessories list.

Buy it now on Tiwal.com 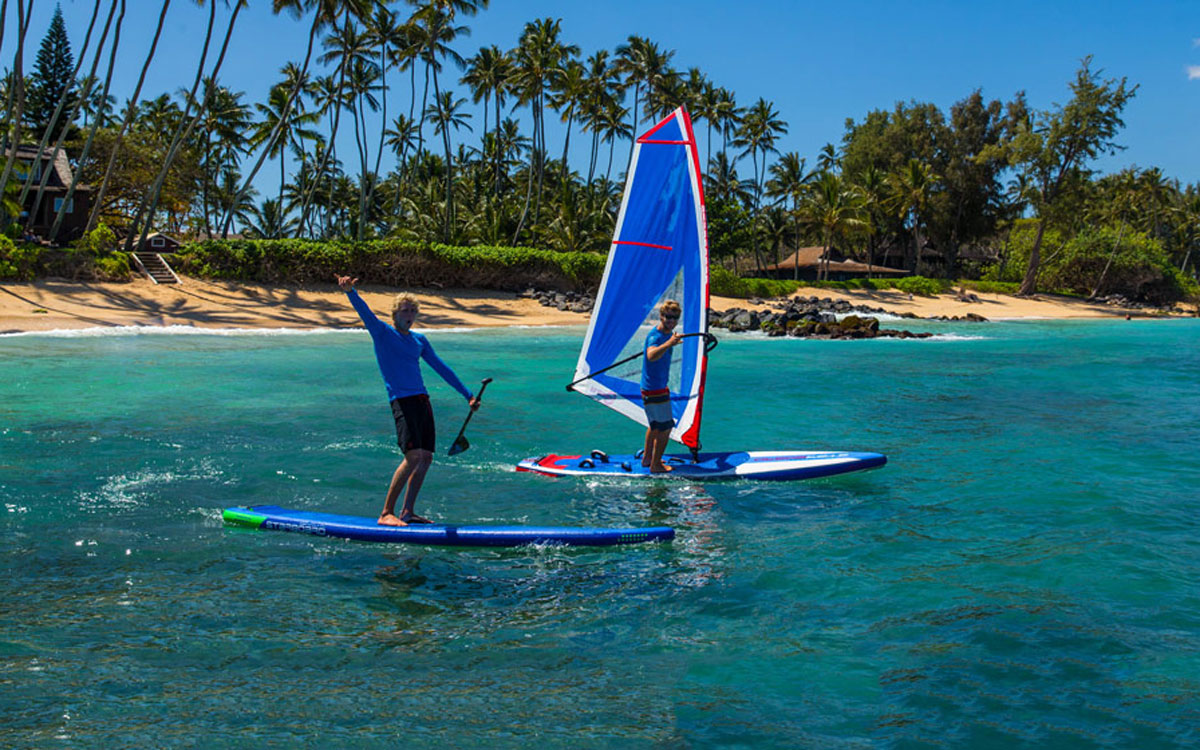 The rise of stand-up paddleboards, windsurfing SUPs and inflatable SUPs led to a hybrid of all three. Since Starboard launched an inflatable windsurfer seven years ago, the design and build quality has risen to produce fun, planing, freestyle boards.

Inflatable rigs are available, but for those wanting more performance, a four piece solid mast and three piece boom makes a compact solution with an inflatable board.

Buy it now on Amazon (UK) 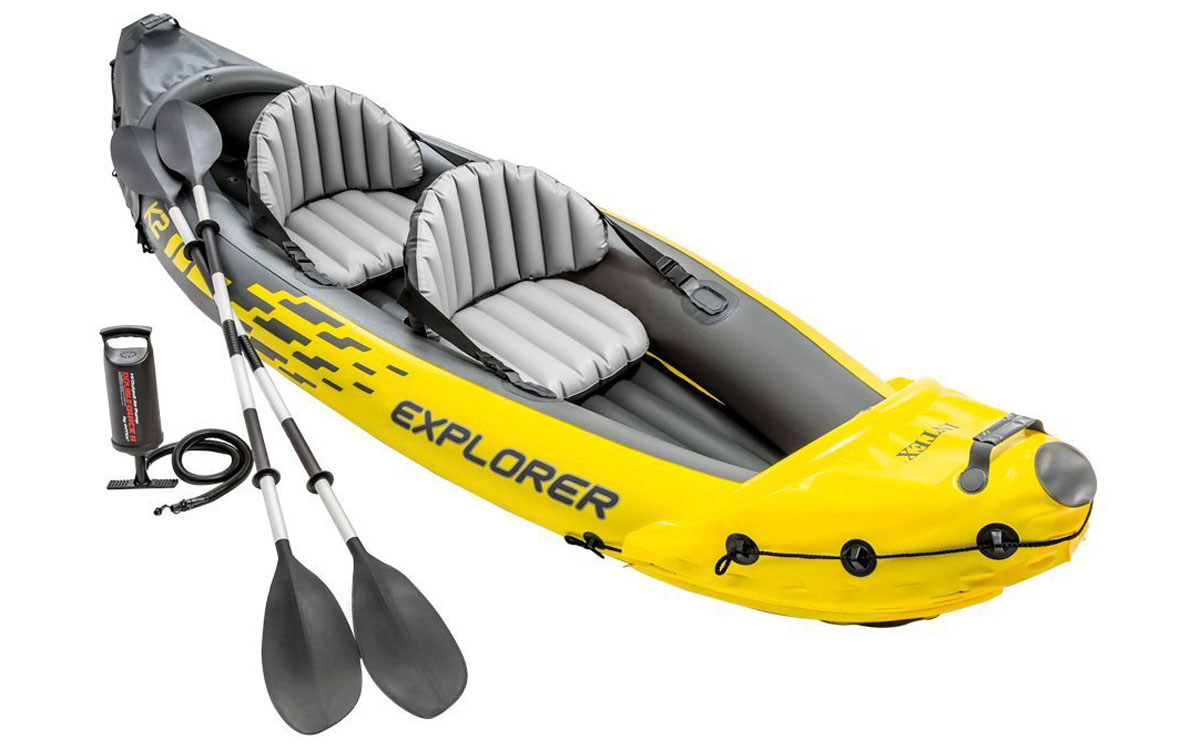 For those who like to do things as a couple, a two-person inflatable kayak can be an economical solution to exploring creeks. The Intex Explorer K2 is one of the best selling models in the UK.

Buy it now on Amazon (UK)

Buy it now on Amazon (US)

First published in the July 2018 issue of Yachting World.