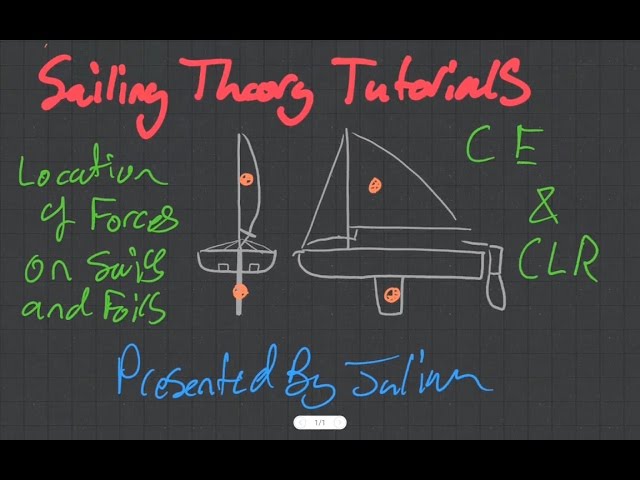 Saling tutorial
Share on Facebook
Share on Twitter
Share on Pinterest
Share on LinkedIn
In this video, the idea that a distributed pressure force can be simplified to a single force vector acting on a force centre is introduced. It is also discussed, that two forces separated by a distance will generate a moment or torque, which causes an object to rotate.

The locations of the centres of effort, and lateral resistance are discussed in 3 dimensions on a model sailboat. And an orthographically projected diagram is drawn for the boat.

The fore and aft, as well as the side to side positions of the CE and CLR are related to the conditions of weather, lee, and neutral helm, which are explained by the two forces acting at a distance to create a moment causing the boat to either head up or bear off.

NOTE: It has come to my attention that this video fails to mention the important effect of the shape and area of the boat’s hull below the waterline on the amount of Lateral Resistance and the location of the CLR. Please be aware that this is another factor that can play into the position of the CLR.

Boat Driving #shorts
FULL TOUR of our Completely TRANSFORMED $100 Boat | 1978 DeFever 43′ Trawler
5 expert tips for leeward mark roundings
What’s it Like to Sail a Legend?
Making the switch: How we become liveaboards