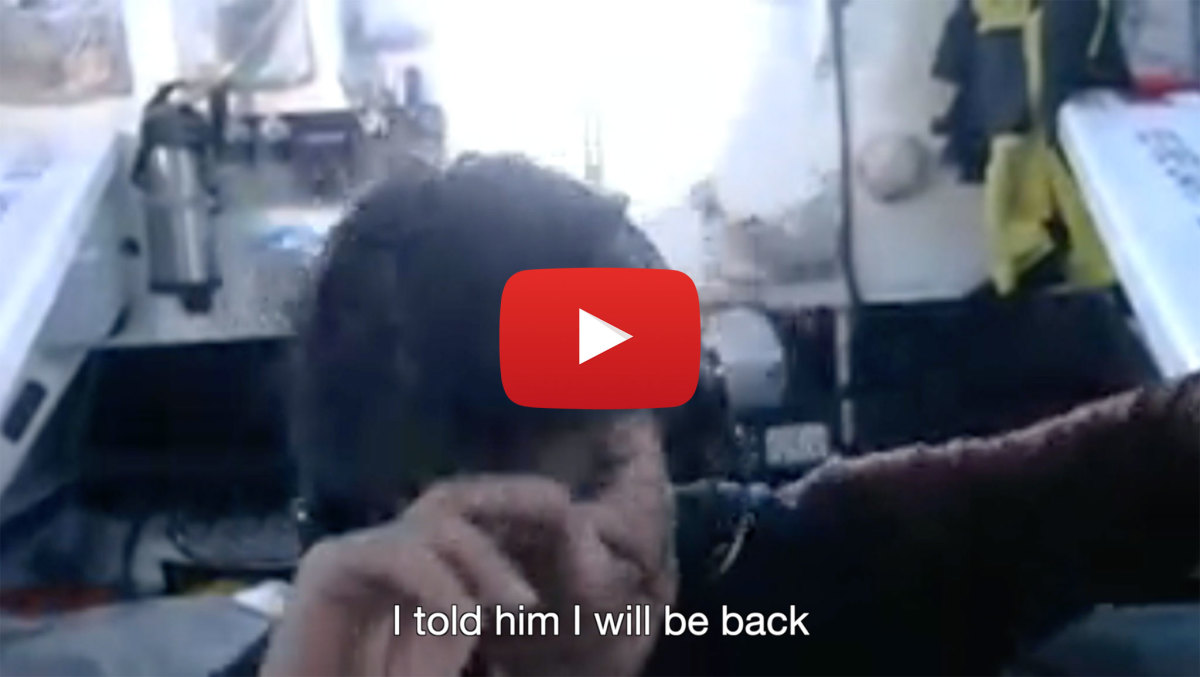 Around 1345 UTC on Monday afternoon, Vendee Globe competitor Kevin Escoffier (PRB) activated his EPIRB 840 miles southeast of The Cape of Good Hope, in the heart of the Southern Ocean amid some of the most violent water anywhere on Earth. Shortly after, he managed to get a message to his team: “I’m sinking. This is not a joke.”

The boat had hit a wave going 27 knots and with a loud bang, snapped just ahead of the mast bulkhead. In seconds, it was flooded with water.

Race management immediately hailed the nearest skipper, Jean Le Cam (Yes We Cam!). Le Cam diverted his course to Escoffier’s last known position, but it would take nearly two hours for him to reach it. With the help of drift calculations, he began his search. PRB was gone, but Le Cam quickly found Escoffier aboard his liferaft, and they exchanged a few words.

However, the sea state made it impossible for Le Cam to pick him up without a maneuver that would cause him to lose sight of the liferaft. Fans of the Vendeé Globe anxiously waited for news, but all that came was an announcement that Yannick Bestaven (Maître Coq IV) and Boris Herrmann (Seaexplorer-Yacht Club De Monaco) were being diverted to assist. Speculation online was rampant, but one thing was on everyone’s mind: they wouldn’t send more boats unless there was difficulty finding Escoffier.

The high waves made AIS transmissions impossible, it was blowing 24kts and night was setting in. Le Cam was sailing with three reefs in and his emergency motor unsealed, but there was no guarantee that the weather would calm down enough to get Escoffier onboard.

“Being in a raft in 35 knots of wind is not reassuring,” Escoffier says. “I was only reassured when I saw Jean. But the problem was to find a way to get on board with him. We said a few words. It was a real battlefield out on the water. He was forced to move away, but I could see he remained close by.”

Finally, in the early morning, Le Cam was able to throw Escoffier a line. Despite 12ft waves and the fact he was wearing a survival suit, Escoffier managed to climb aboard.

“When I found myself on board with Jean, we hugged each other,” Escoffier says. “He said to me. ‘Shit you’re aboard. That was tricky!’ I replied, ‘I have spoilt your race. You were doing so well.’ He replied, ‘That doesn’t matter. Last time it was me who upset Vincent’s race.’”

Le Cam was referencing a similar incident during the 2009 Vendeé Globe during which he’d been on the receiving end of a rescue by Vincent Riou. As always, the comradery between solo sailors is the epitome of seamanship, willingly sacrificing years of campaigning and training to help someone who’d been an opponent up until a moment earlier.

Meanwhile, lost for the moment amid the headlines about Escoffier was this weekend’s announcement that former race favorite Alex Thomson (Hugo Boss) had retired from the race. After leading the fleet across the Equator and toward the Southern Ocean, Thomson noticed structural problems with his boat, which had been custom built for this race. He attempted a repair on the water, but when he lost a rudder as well, was forced to call it quits.

Escoffier was in third place at the time of the sinking, and the fourth through seventh place boats were all diverted to assist with the search. Coupled with Thomson’s abandonment and frontrunner Jérémie Beyou’s (Charal) forced return to Les Sables d’Olonne, it seems that the front of the pack is a risky spot to be. Perhaps the leading boats are being pushed too hard or the new builds don’t have enough miles under their keels to be properly tested. Either way, it’s quickly becoming apparent that the way to win this Vendeé Globe is to shoot for 11th and wait for the first 10 boats to drop out. This is one race where there are no guarantees.

There is no way that this boat fits this Dock! Part 2 #fishing #shorts
Racing Recap: Leg One of The Ocean Race
⛵️Sailing with Riley from La Vagabond? 😎 (clickbait) Ep. 266
Pink isn’t for everyone, but I love it in my office! #officemakeover #pinkwalls #officedecor #home
How to do Navasana – Boat Pose for Beginners