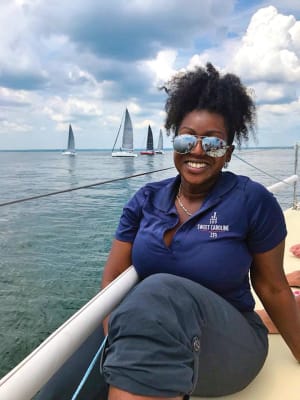 In recent months, US Sailing, like many organizations, has been taking a closer look at diversity to ensure it’s doing the best job it can of introducing people from all backgrounds and ethnicities to the sport. As part of this effort, this past summer it organized an online panel discussion titled “Increasing Diversity, Equity and Inclusion in the Sport of Sailing,” moderated by Ayme Sinclair, vice-president of the National Women’s Sailing Association and CEO of Women Who Sail. (In a second installment of the series, US Sailing also hosted an online panel discussion focusing on sailing and the LGBTQ community.) Principal Editor, Adam Cort, recently spoke with Sinclair about her work with US Sailing as part of SAIL magazine’s new Point of SAIL podcast. What follows are some excerpts from their conversation, which can be listened to in its entirety at sailmagazine.com/web-exclusives/podcasts.

First, could you tell us a little about how it was that you got into sailing and how you’ve already done so much in such a short time?

I got into sailing about five years ago. A friend invited me out, and very shortly afterward I got certified and then I jumped straight into the racing circuit. It was really exciting for me to do that because our team was super unique. Most of the women had more tactical, strategic positions on the boat, and we were a mostly woman team. For me, it was really exciting to see the effects of sailing and how empowering it was for women… Eventually, I got to the point where I started talking about this on Instagram, where about 140,000 people were following along with this journey. I felt it was really important for other people to get out on the water who looked like me, so we can diversify the space. Eventually, I moved from just talking about it on social to actually travelling with groups of friends and doing trips around the world and racing in different parts of the world, which led me to Kenya, where I created the first all-female sailing team to compete in a race, which was pretty historic for that area.

Fast forward to 2020—I wonder if you could get us up to speed on how it was you came to work with US Sailing leading its panel discussion.

Before I became vice-president of the National Women’s Sailing Association I was just a regular member of the organization, and they had this conference up in Marblehead [Massachusetts]…and while I loved the idea that women were teaching women, the only disappointment in being there was that I was the only person of color. So as I became more and more involved in the organization it became more and more clear to me that this is an initiative that we really need to focus on. The idea of gender equality is really important, but there are so many more pieces to it. There’s ethnicity. There’s the socioeconomic part of this. There’s the LGBTQ part of this. There are also people who are disabled. And so these ideas of creating spaces for other people who don’t necessarily have access to the water became a passion of mine. Then we move toward what’s currently happening in our country and the whole movement around fighting for equality [after] the George Floyd incident. It just created this new sense of urgency to talk more openly about diversity and inclusion… All that led me to work with US Sailing to moderate the panel that they had, which was so important, and I think very impactful for those who were able to attend.

Digging a little deeper into the specifics of the panel discussion, what exactly do we mean when we talk about diversity, equity and inclusion?

All three of those words can have many different meanings. But when I think about diversity, I think about the idea that we’re embracing differences, and also how impactful that can be when we start doing that. When we start embracing the things that make us different, those are also opportunities that can lead to innovating. When I think of equity, I think of fair treatment, which will remove barriers for people, so that we can have equal access. Then lastly, when I think of inclusion, I think of creating welcoming environments, which leads to making it so more will participate, and that also leads back to this idea of fostering ingenuity. If you have more people out there you have more people who can solve problems in different ways. When I think about what they all mean together, I think about the great analogy that (attorney and past commodore of Chicago’s Jackson Park Yacht Club) Karen Harris gave on the panel, and that is: diversity is the invitation to the dance, equity is making sure you can get to the dance, and inclusion is making sure that when you’re there, you actually get out on the floor and dance.

Central to the discussion was the way the panelists provided some great practical steps on how to increase diversity in sailing. I wonder if you can share one of them with us.

I think the one piece of practical advice that hit home for many of us was if you’re thinking about trying to engage with a group, you’ve really got to think about it like developing relationships. Most of the time people go straight to, “Okay, well, we’ll figure out how to identify this group of people, and we’ll just invite them.” But there’s a level of trust and understanding that has to happen first. That takes time, and it’s easier if you have someone on staff who represents them. If you don’t, one thing you can do very easily is reach out to organizations that represent the group you’re trying to pull in. For instance, if you search for a black women’s law association of New York City, I guarantee you a hit will come up on Google for a group that exists like that, and there are groups like this in every major city around the United States. And so if you just call up one of those groups and say, “Hey, listen, we would love to invite you to come down to the club to host your next event,” I think they would be very excited to come down and do that. And the only thing you ask in return is for five minutes on their program to talk a little bit about the club and some of its benefits. If you don’t have a club, there are other ways to still do this kind of work. Your best bet is to reach out to a closely aligned group; it might not be a black sailors’ group, per se, but it might be some sort of organization like Outdoor Afro. That group is national, and they have chapters all over the United States. They’re also already outside and active. It’s not a hard curve left into sailing if you’re already kayaking. That’s just one tip for those thinking about doing this kind of thing.

Ed Note: To hear the entire US Sailing discussion, which also included panelists Lou Sandoval, commodore of the Chicago Yacht Club; Capt. Bill Pinkney, the first African-American to solo-circumnavigate the world; and Joe Harris, manager of sailing for the Chicago Park District, go to sailmagazine.com/web-exclusives/podcasts