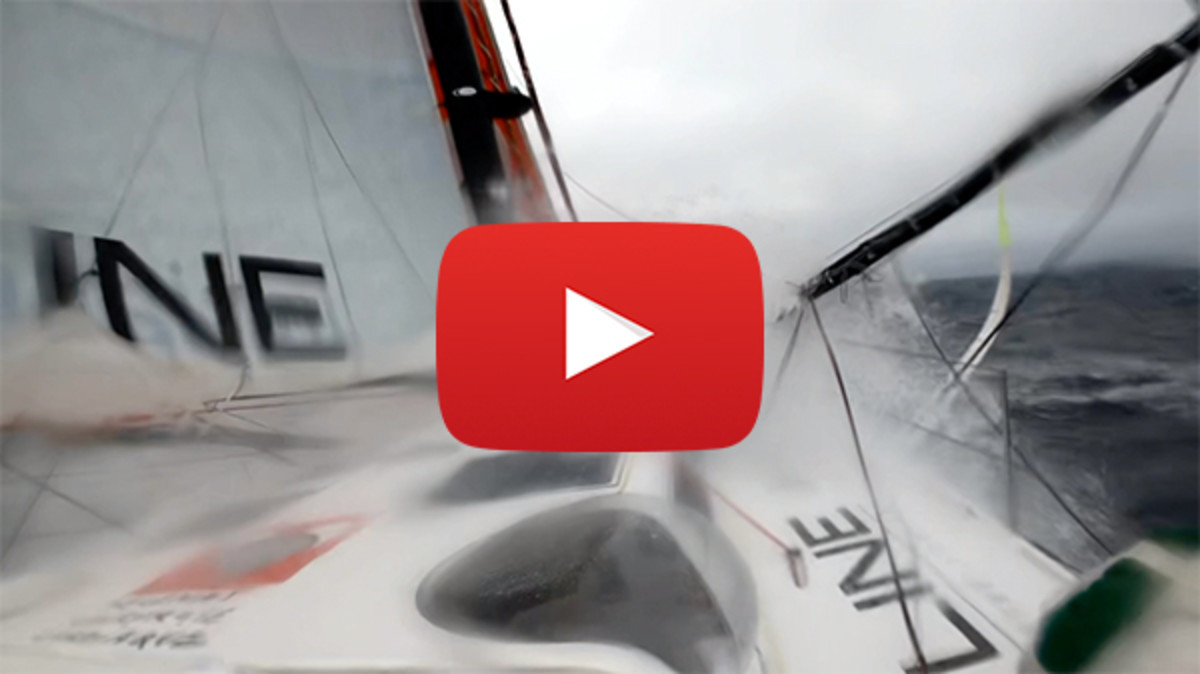 Video courtesy of the Vendeé Globe: for subtitles in English, click the “CC,” subtitles/closed caption button

The Vendeé Globe fleet took off from Les Sables d’Olonne on Sunday, November 8 and has been fighting their way across the Bay of Biscay and south ever since. Currently, the majority of the fleet is just passing the Azores and headed into Theta, the record 29th tropical depression of the season. As the front of the fleet catches 30+kts of wind, they’re rocketing south. The back half of the fleet, however, is sitting in less than 10kts and will have to catch the system before it’s gone, or else risk being left behind.

As always, the first days of the race are riddled with drama. From a closely packed fleet to early shake downs to the Bay of Biscay itself, the standings are in constant flux. Fabrice Amedeo (Newrest-Art et Fenetres) almost immediately turned back to shore after starting the race to make repairs on a faulty headsail hook. Formerly one of the top hopefuls in the race, this repair set him back two and half days and about 500nm.

About the time he finally got underway, the rest of the fleet was making a first tactical decision: hug the coast of Spain for a more direct route or head offshore for more wind. Most of the fleet, led by Jérémie Beyou, headed out to sea, but about a third, including then-front runner Benjamin Dutreux (OMIA-Water Family) stayed close to the coast. By the time the fleet re-converged a day later, neither path proved a clear winner—Maxime Sorel (V and B Mayenne), who’d taken the shore route, moved into the lead but Charlie Darlin (APIVA) who’d gone outside was in second.

Meanwhile, Armel Tripon (L’Occitane en Provence) was faced with a difficult decision of his own. After two days and 14 hours, he turned back to Les Sables d’Olonne due to a broken J3 hook. However, after consulting with his shore team, the retreat was abandoned in favor of fixing it himself while underway. By the time he resumed racing, He’d lost about 70nm on the fleet.

About the time of Tripon’s return to course, Beyou’s team announced that Charal would be returning to Les Sables d’Olonne due to undoubtably the most devastating damage of the race so far. Charal’s Technical Director Pierre-François Dargnies reported that “it started around 1400 on Tuesday when a sheet block tore off, which sprayed carbon all over the cockpit. Jérémie had to do a little repair, he got in the boat to get it all set up, and while he was inside the boat, he hit something. In so doing the boat gybed it ended up on the other side. He then realized that the starboard rudder was damaged. He decided to wait for the passage of the front in last night to start the repairs on the rudder. He tacked this morning while waiting for the sunrise to be able to tackle this repair, but after a few hours later the starboard backstay (cable that supports the mast from the rear) broke suddenly, probably because the sheet block is quite close beside the backstay and the carbon shards must have sheared it.” The damage was devastating for Beyou as he had been one of the favorites to win the race overall and had dedicated four years of his life to preparing for this campaign, to the point of being unable to see his father in the hospital after a stroke due to pre-race quarantining. Alex Thomson (Hugo Boss), one of his main adversaries, voiced his support and sympathy, saying “it is terrible news, and nobody would wish that on anybody, Jérémie has worked harder than anybody probably. He has done an extra year with his boat. He has a great team, a great technical director, he has done it all and he amazed the world when he brought Charal out. He was the first one flying in the sky, so I am devastated for him.” Thomson, it should be noted, has been in the same position, forced to abandon two of his four Vendeé attempts.

Soon after, fans noticed that Sebastien Destremau (Merci) was making a wide loop and heading north again, leading to confusion and concern. It was a few hours before answers were available, but fortunately, it was nothing more serious than Destremau’s exhaustion catching up to him and a few hours of inadvertent drifting while he napped.

The fleet has spread out and a few front runners are beginning to establish themselves, but if there’s one thing fans of the Vendeé know, it’s that the race is long, and anything is possible. In the coming days, we’ll see how skippers navigate Theta and whether anyone flies too close to the sun, so to speak. If nothing else, the conditions will be good practice for the Southern Ocean and allow weak points to reveal themselves in hospitable climes while skippers still have a good chance at repair or rescue.

For race updates, go to vendeeglobe.org/en