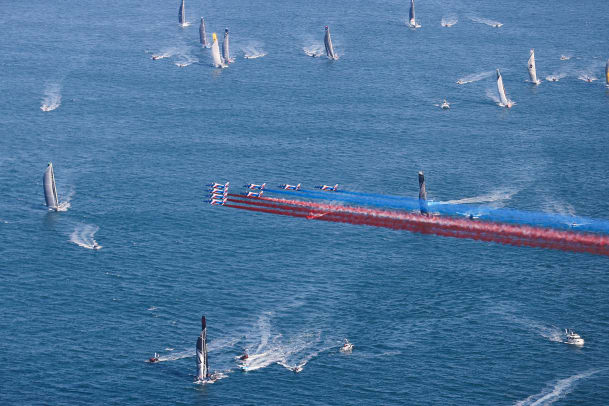 The Vendeé Globe kicked off its 2020-2021 edition yesterday and the first 24 hours have led to excitement and disappointment in equal measure. The beloved French race got underway with little fanfare as the millions of people who typically come out for the start of the race were forced to stay home due to France’s Covid outbreak. In conjunction with skippers having to quarantine before the start (no final hugs on the docks from families or loved ones) it was a somewhat bleak and lonely start, though perhaps fitting for a race that reliably is both bleak and lonely.

Through the first night, Jeremie Beyou aboard Charal led the pack west across the Bay of Biscay. As the fleet turns south, the original frontrunners have sunk back slightly in the scoring but will benefit from better wind angles and are likely to make up any lost ground.

“We had nice conditions, the sailing was fast and there was a nice group of boats to line up with,” says Sam Davies of Innitiatives-Coeur, who hopes to be the first woman on this race’s podium since Dame Ellen MacArthur in 2000-2001. Of the six women in the fleet, she’s one of the strongest contenders, having placed fourth in 2008-2009. “Then a maneuver right in the middle of the night, change sails and get through a little light patch and then some more breeze hit. It was pretty active, not much time to rest, but that’s probably good because I think on the first night it’s quite difficult to get proper rest.”

English Vendeé veteran Alex Thompson on Hugo Boss was near the front of the pack until that middle of the night maneuver led to a struggle with his J3. “That cost me about seven miles,” He also snagged some fishing tackle and had engine trouble, “but apart from that, uneventful” he cheerfully recounted. Of course, in these early days of the race when the pack is so close, a few miles can make a big difference on the leaderboard.

The Vendeé is a non-stop solo around the world race, but it does make one exception. You may return to the start to make repairs. Fabrice Amedeo is taking advantage of this to repair a headsail hook aboard his boat, Newrest–Art & Fenêtres, and at press time has fallen 200 miles behind the rest of the fleet. With a whole circumnavigation ahead, anything could still happen, but Vendeé sources report that he’s “bitterly disappointed.” No word yet on how long it will be before he’s back on the water, other than that it’s anticipated to be a “fast pitstop.”