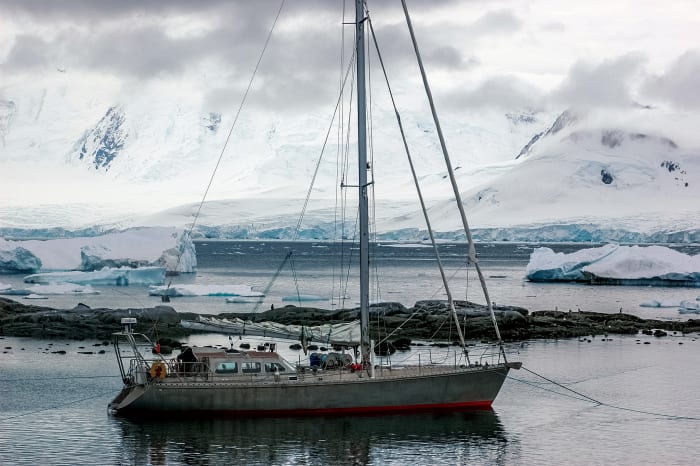 A reefed main and full poled-out Yankee pulled our 56ft, aluminum-hulled cutter, Seal, toward Antarctica. My husband, Hamish, and I were halfway across the Drake Passage, with four charter guests and our two young children onboard. We had 17 knots of apparent wind and 10ft seas coming up from astern, some of the best weather we’ve ever had on our many voyages south. At 0200, barely dark, we jibed all standing. The jibe was silent, thanks to the nylon preventer that took the shock out of the system (the children never even woke), but the nylon still stretched enough to leave the main pinned against the runners, and we didn’t have enough steerage to simply come back around again.

The fastest solution was to start up the engine and steer back onto the correct jibe. That done, Hamish shut the engine down again, and we carried on. Although we had heeled over fairly sharply with the jibe, it never occurred to us to be concerned about our diesel, as the exhaust rises to deck level. However, as events would prove, we should have been.

A day and a half later the wind died, and I went to start the engine. On checking the dipstick, though, as we do at each startup, I found the oil was emulsified and the color of café-au-lait, a sure sign there was water in it. We also give it a quick sniff—a whiff of diesel can be the first sign of a leaking injector—but there was nothing. Since the engine had started perfectly after the jibe, we didn’t think we had water in the cylinders, and our thoughts went to a failed head gasket or a cracked head. The good news was we had a full set of replacement gaskets aboard, and assuming that was the problem, we could make the fix ourselves.

Whatever the problem, we now had no engine, since trying to turn it over could have caused irreparable damage in the event there was, in fact, water in the cylinders—a risk we weren’t willing to take. Before we could start ripping the engine apart, we also needed to make sure the boat and our clients were safe, given the limited weather windows in this part of the world. If it had been a simple fix, we could have done it at sea. But since we were anticipating a lengthy head-gasket replacement, that meant seeking shelter.

The forecast was for strong northerly winds, and we discussed either heading back to South America or continuing on to Antarctica. In favor of continuing: we had 20 years of experience in the anchorages ahead, we had a tough 12ft inflatable workboat and 25hp outboard to keep Seal moving in any calms, and the wind was behind us. The forecast also called for gales off Cape Horn and reasonably good weather in Antarctica. Against us was the possibility the problem was more than just a failed head gasket and the fact the approach to Antarctica also came with the usual concerns about icebergs, bergy bits and the myriad other difficulties of high latitude sailing. If Hamish and I hadn’t already spent so much time sailing these challenging waters, we might have chosen the easiest (but slowest) option of sailing to the Falkland Islands.

Eventually, we decided to continue on. The wind filled in, and we sailed on through Boyd Strait. As we did so, Hamish pumped out the contaminated oil and filled the sump with diesel, letting the boat’s motion clean it out. In the end, he changed the diesel in the sump twice, using a couple of gallons each time. There was plenty of sloshing action as we sailed toward our destination. We also had plenty of spare jerrycans in which we could carry all the contaminated oil and diesel we generated.

Tough day. Sailing up the Croker Channel then hove-to at 0530 off Cape Kaiser. Forecast strong north-northwesterly. Drifted down on alternate jibes to halfway down Brabant Island, then wind died as barometer rose. Full sail, then gale force and down to fourth reef. Epic thrash past Cape Anna and just squeaked through, then wind died off Rongé island. Becalmed.

That’s typical Antarctic sailing—calms followed by gale-force or higher winds, then another calm, as the lows come through and the nearby mountains change the shape and strength of the wind. It’s the reason Seal is equipped with a 115hp diesel. In all, we spent five hours beating around Cape Anna—spray coming on deck and brash ice in the water, happy for the thick plating in Seal’s bow and the fact we can come about in those kinds of conditions without having to switch the runners. We made plenty of leeway, but still slowly clawed our way around.

On the other side of Cape Anna, the sound of whales blowing and penguins cawing filled the air as things went light again. In order to keep moving, we assembled the inflatable and motored the last six miles to the Neumayer Channel with the dinghy on the hip. As we did so, Hamish also went aloft to scout for ice.

Unfortunately, once in the channel, there was so much ice in the water continuing on this way would have risked damaging the inflatable. We had resisted putting the dinghy astern because of the Aries wind vane, but no longer had a choice. To make things work, we removed the Aries leg and lashed a fender across the scoop, then jammed the bow of the dinghy below the fender. Spring lines to the stern of the dinghy kept it from fishtailing. Using this setup, we were able to carry on for another 15 miles at up to 4 knots, enjoying the Antarctic scenery along the way reflected perfectly in the still water. Small pieces of ice bounced along the hull, clearing a path for the dinghy. Arriving in Dorian Bay, we anchored and ran four lines ashore, after which we had dinner and our first decent sleep in days.

The next morning, we pumped the diesel out of the sump and replaced it with yet more oil. By now we’d discussed the situation with a team of Cummins engineers via e-mail, and they were convinced it was the head gasket. Having given it some more thought, we were also more confident than ever there wasn’t water in the cylinders, because the engine had started perfectly after the jibe. Joe, one of our guests and a retired fisherman, suggested we try running the engine with the pressure cap off the coolant tank. With the seawater temperature barely above freezing, we didn’t really need it, and this would reduce the pressure on the head gasket, perhaps providing a temporary solution. Joe had heard of fishing boats delaying a head gasket repair for a full season by employing this trick, so we decided to give it a try. As an added benefit, we might also be able to see bubbles in the coolant tank, which would serve as further confirmation the head gasket was the problem.

Holding our breath, we started the engine: there were no bubbles in the coolant and no water in the oil. It looked like we’d found a solution.

In fact, we were able to do the entire remainder of the monthlong trip with the oil pressure cap off. Not only that, but when we returned to South America, we ran the engine at full revs again with the pressure cap on without any problems and have since put another 5,000 hours on the engine with the same result. Because the engine had started fine right after the jibe, we’d crossed off the possibility that water had entered the engine through the exhaust. But now it seems almost certain. We still don’t know why the engine didn’t hydrolock. The rings are in good shape, and the valve timing is spot on as we adjust it annually. We’re mystified.

Still, to be on the safe side, we’ve now installed an external flap valve on the exhaust that we make a point of keeping closed in all conditions. When building the boat, we opted not to add a valve because the exhaust pressure in the 4in line could blow the hose off if we were to ever fail to open it in an emergency. (Hamish had seen this happen on another boat he’d once crewed on, and the interior had quickly filled with hot saltwater and exhaust fumes!) Of course, even if we’d had a valve that we only closed in heavy weather, it still wouldn’t have done any good on that beautiful night deep in the Southern Ocean.