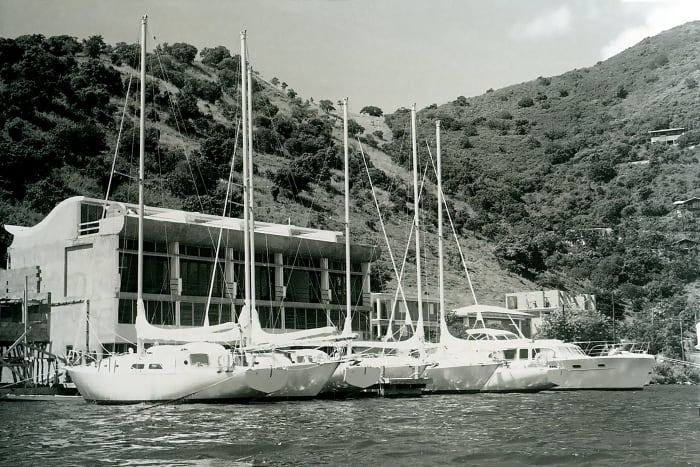 Watching a tropical sunset from the deck of a sailboat that’s yours for the week may be a common pastime today, but the bareboat charter industry wasn’t always a thing. Only just over 50 years old, the charter business came from an unlikely place and has evolved significantly in recent years. How did it start, and how has it grown?

A New Jersey dentist, Jack Von Ost, is the father of the modern charter market. He founded Caribbean Sailing Yachts (CSY) in 1967 in Tortola with the idea of creating a fleet of similar boats, professionally maintained and equipped with standard features. He opened with a fleet of 16 Capri 30s and eventually went on to develop two purpose-built designs, including the Carib 41 and the CSY 44. Van Ost also pioneered a number of now-familiar concepts, including owner lease-back programs, onsite provisioning, multi-base operations, a standardized manual for boat systems and suggested local itineraries.

Unfortunately, the company foundered partly due to its own success. When the Peter Schmitt-designed CSY 44 was introduced in 1977, Van Ost decided to build the boats himself to feed the charter business. Although the design proved popular (400 were built from 1977-81), the boatbuilding operations weren’t well managed and soon funneled money out of the charter side of things—so much so that the latter closed its doors in the early 1990s, handing over its remaining bookings to The Moorings.

The Moorings has its own history with founders Charlie and Ginny Cary opening their doors with six Pearson 35s. The company started operating in 1969, also in Tortola. The company eventually expanded throughout the Caribbean and into the South Pacific (Tonga and Tahiti) in 1984. In 1989, the company grew again, this time into the Mediterranean with a base in Greece. Eight years later it introduced catamarans to its growing fleet, setting into motion a trend we see fully realized today.

Other companies also joined the market, including Sunsail, which launched in Greece’s Saronic Gulf in 1974. Founder Janet Green started operations on the island of Aegina with seven 25ft Snapdragons and enjoyed a good run. As Sunsail grew, its parent company took over French-owned Stardust Charters. Then, in December 2005, Sunsail merged with The Moorings, which turned 50 in 2019.

In fact, the charter business has been a bit incestuous throughout its development. Many of the same managers have moved between brands or started new ones. Such was the case with Loïc Bonnet who started at Stardust, made his name at The Moorings and eventually founded his own company, Dream Yacht Charters (DYC) in 2001. Bonnet launched with six boats at a base in the Seychelles, after which he went on an aggressive expansion campaign, enlarging the company by acquisition as well as organic growth. Today, DYC has 1,250 yachts in 60 locations throughout the world.

Of course, many smaller charter companies have popped over the years as well, with dozens of smaller specialty players opening their doors throughout the United States, Europe and Caribbean. These include companies like Horizon Yacht Charter, which have multiple bases, as well as others with a single base, like CYOA in the U.S. Virgin Islands, Cruise Abaco in the Bahamas, Southwest Florida Yachts or Conch Charter, TMM and Conch in the BVI. The end result is a vast fleet of well-built, well-maintained boats aboard which you can enjoy the incredible privilege of being a yacht owner for a week pretty much anywhere in a world—something to think about next time you’re sipping a rum drink in your own corner of paradise. Cheers!