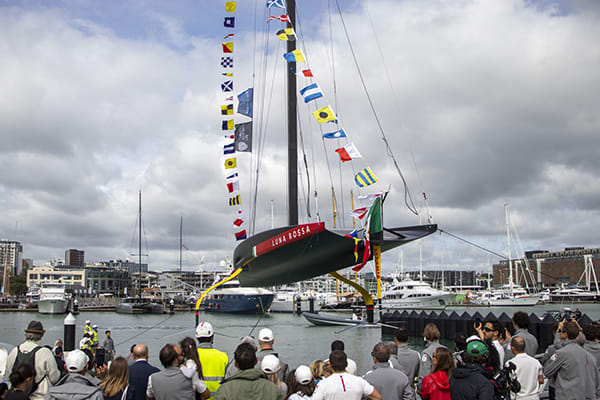 Hot on the heels of the UK’s Britannia and the United States’ Patriot, Italy’s new AC75 Luna Rossa, formerly known as Boat 2, was christened in Auckland, New Zealand, this morning. As the moniker suggests, it was Team Luna Rossa Prada Pirelli’s second design.

In his christening address President of the Luna Rossa Prada Pirelli Team, Patrizio Bertelli, said that he “would like to thank the Persico boatyard and all its staff who managed, despite the difficulties of the moment, to respect delivery times and allowed us to use this second boat who, for many aspects, represents an evolution of the first. I also want to thank the whole team: they have worked day and night, with no distinction of roles, to be on deadline and ready to launch today. In a few days we will already see Boat 2 sailing and will get our first impressions, which I am sure will live up to expectations. And, soon after, racing starts.”

It’s down to the wire for all three teams, which have less than two months to fine tune and learn to sail their new boats before racing begins with the PRADA America’s Cup World Series and the PRADA Christmas Race, scheduled to take place December 17 to 20.