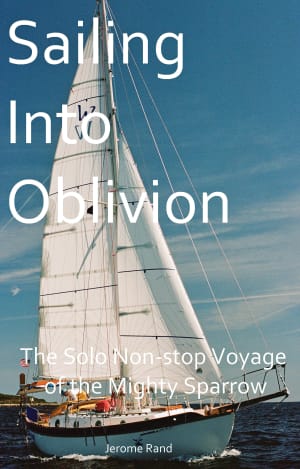 Sailing Into Oblivion by Jerome Rand

As refreshing and inspiring as Jerome Rand’s 2017-18 solo-circumnavigation may have been, his account of the voyage in the book Sailing Into Oblivion: The Solo Non-Stop Voyage of the Mighty Sparrow may be even better. You may recall Rand made the trip aboard his decades-old Westsail 32 with little if any fanfare and even less sponsorship. Not surprisingly, the tone of the book is much the same, a straightforward, often inspiring tale of a lone individual who casts off lines simply for the love of sailing and the sea. Not that the trip was without its hardships. On the contrary, Rand is not shy about describing the ups and downs of solo voyaging. The result, though, only serves to make the book that much more satisfying, that much more engaging. In reading Rand’s account of his experiences dealing with everything from deadly calms to killer storms off Cape Horn, you really feel at times like you’re right there with him. Same thing when he celebrates the voyage’s successes, and you find yourself celebrating, too. A must-read for any sailor, especially those sailors with dreams of also someday trying out solo-sailing.

Ed note: You can learn more about both Rand and his new book by listening to the SAIL magazine Point of SAIL podcast interview with Rand at sailmagazine.com/web-exclusives/podcasts