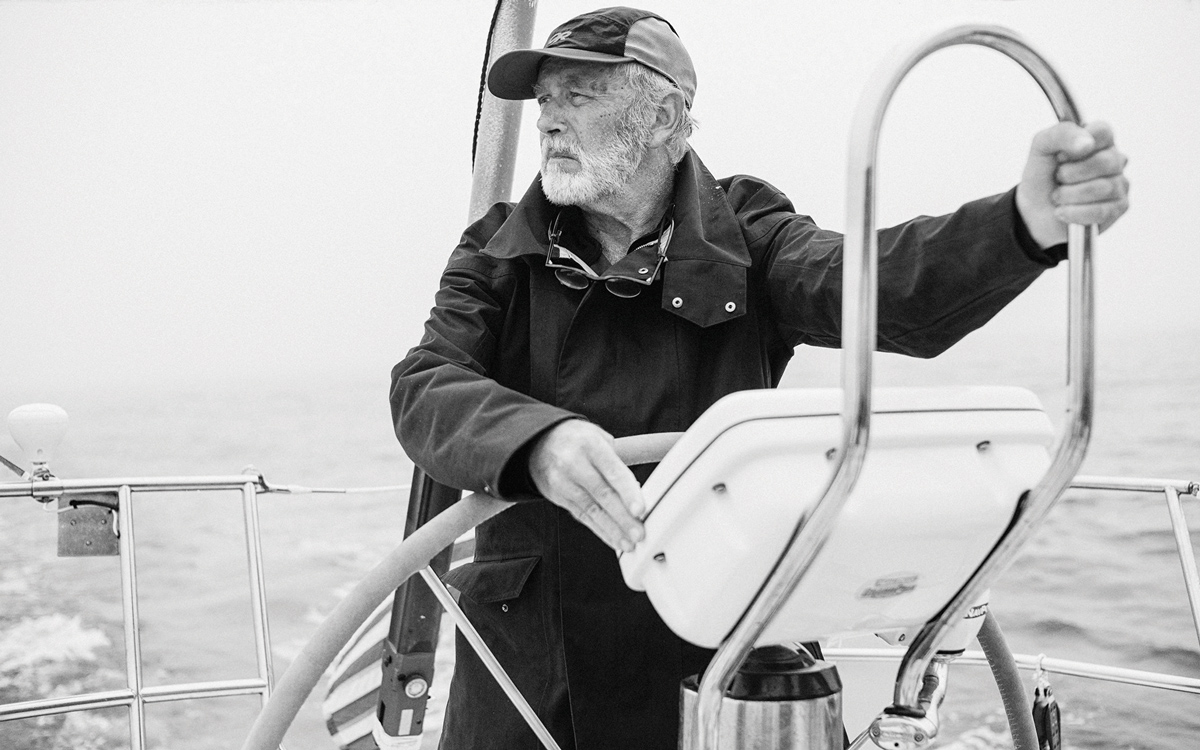 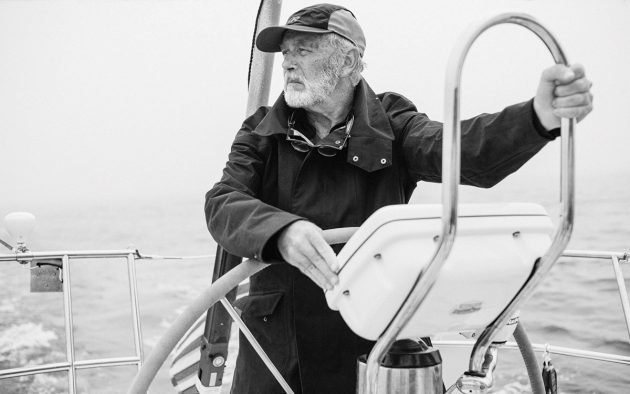 ‘Rounding the Horn – Being a story of Williwaws and Windjammers, Drake, Darwin, Murdered Missionaries and Naked Natives – a deck’s eye view of Cape Horn’. So reads the front cover of Dallas Murphy’s book of the same name. Settling in for a good long read of this work is a pleasure a sailor doesn’t come across every day.

Murphy signs aboard one of Skip Novak’s yachts, Pelagic, under Captain Hamish Laird and his mate Kate Ford to cruise south from the Beagle Channel. He is a journalist and a novelist, so you’d expect his account to be well written, but this remark, as bland as a school report, does not begin to do him justice.

The construction of the book, its widely varying content and the descriptions of personal experience are a rare class act. Meticulously researched historical references are blended with hands-on accounts of present-day action in these remote seas. We join Dallas and his shipmates soon after dark, bound from Puerto Williams towards the archipelago of the Horn.

From Rounding the Horn by Dallas Murphy

The haze that had materialised with full dark suddenly lifted – maybe it had never been there at all, another atmospheric trick. The taut horizon distinguished water from air, and the sky filled with stars we’d never seen before except on charts. A strange, indistinct brightness arced over our masthead light like a scattering of luminescent powder – from Puerto Williams to Caleta Martial.

Dick stood up on the side deck and looked aloft. “I wondered if we’d see them.”

“Well, maybe it’s only one cloud. I can’t tell. It’s another galaxy, you know, that orbits the Milky Way. It’s only visible in the Southern Hemisphere.”

We all went forward for a better view.

“There are two, actually, the Large and Small Magellanic Clouds.”

As we stared, they seemed to expand, smudging the entire southern sky with dusty white light. Hamish joined us, peering up nearly vertically, losing our balance every now and then in the swells, scrabbling for handholds.

“Do you see two clouds, Hamish, or just the one?” 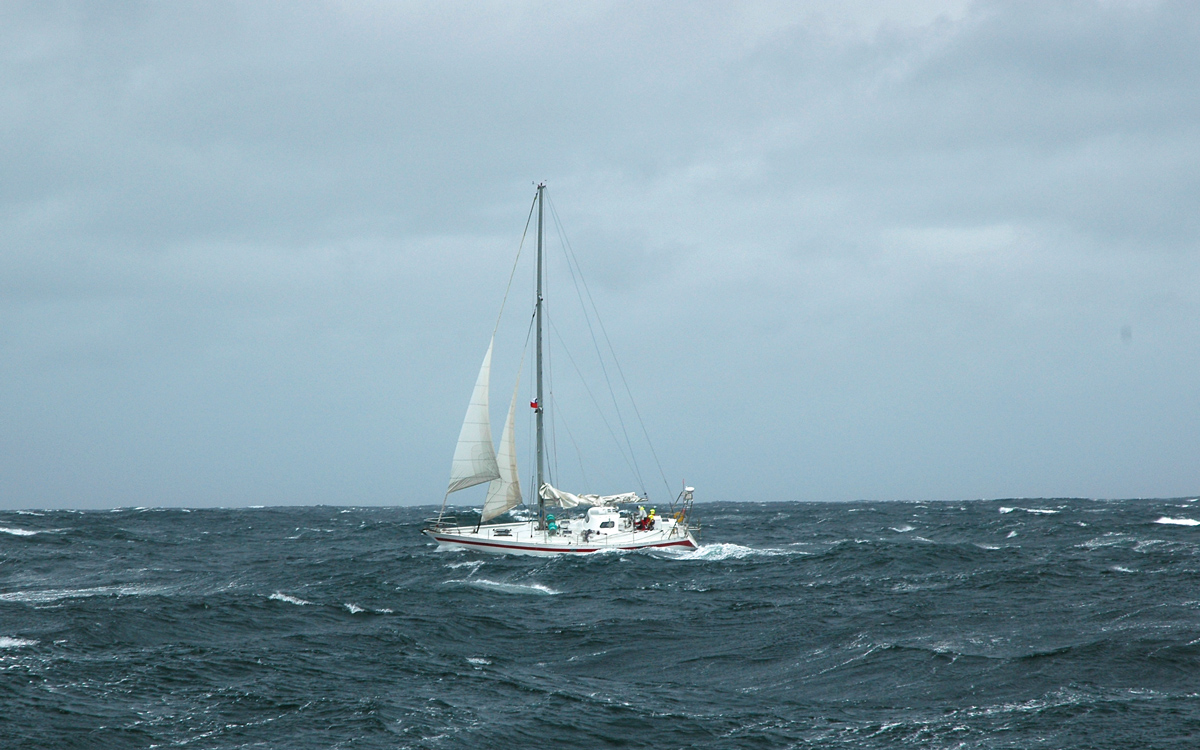 They are indeed two separate galaxies, I later affirmed from a volume in the Pelagic public library. The Large Magellanic Cloud, which contains fifteen billion stars, is nearer to earth, 179,000 light-years against the smaller’s 200,000 light-years. It dawned on us then that we were seeing the Southern Cross just below the arc of the Magellanic Clouds. Most of us had never seen either before, and again we stood staring in silence.

It was nearing midnight when land appeared ahead, first a single ragged black point rising over the horizon, then another away to starboard, the high points of the Wollaston Islands. The next time I looked, 15 minutes later, solid black land loomed in irregular clumps against the lighter sky until land entirely blocked our way.

We seemed to be going like a freight train toward a mountain range. It’s remarkable how the sensation of speed increases when a boat is approaching a featureless coast at night. The mood changes.

I slipped below to plot our position for my own edification, and when I returned topside, I listened to Kate and Dick talking about what a suicidal move it would be to attempt Paso Bravo in the dark if we couldn’t know precisely where we were. But we could.

We’re essentially the first generation of sailors in the history of ships who have the luxury of a dead-accurate fix at the press of a button when­ ever we want it. Our global positioning system knows where it is on the surface of the earth within a few yards, and reports it to us in the age-old language of latitude and longitude. A machine that knows where it is from moment to moment also knows how fast it’s moving over the bottom.

We are, therefore, the first generation in thousands to know where the current is setting us without visual references. Drake, FitzRoy, Cook, and the other artists would never have attempted to nail a narrow cut like Paso Bravo in the dark. And we probably wouldn’t be doing it if we had to rely on the GPS alone, since, as Hamish said, the chart isn’t all that accurate.

In other seas, the navigator can be fairly certain that the land and other obstructions are accurately charted. But you can’t bet the boat on it down here. A spot-on position fix isn’t much use if the land is drawn in the wrong place. The radar would show us exactly where the land was located.

We were in the jaws now, and everyone was alert, bright-eyed, standing lookout for dangers impossible to see as the black cliffs closed in around us on port, starboard, and dead ahead. We had to crane our necks now to see the remaining sliver of lighter sky, still smudged by Magellan’s galaxies. The navigator grows edgy in these circumstances, pencil tapping, now that he’s committed to this hole in the wall; doubts can cloud his logic. What if this is the wrong hole? What if this turns out to be a cove, not a channel?

Only known things, numbers and angles applied with practised technique, can assuage the anxiety. In Magellan’s day, sailors suspected that navigators practiced necromancy, for how else could they know their way? I was glad not to be responsible for tonight’s nav.

Hamish called something from below. David leaned into the doghouse to relay instructions from the captain. “He said slow down.”

Driving, Kate pulled off several hundred rpm. “Tell them to come right ten degrees.” Hamish meant to clear his angle of approach, take it right down the middle.

I relayed the order to the helm, then came back to watch the course adjustment take shape on the screen. Hamish was using dividers to measure distances right off the screen – nothing is as accurate as a radar range if you read it right. He drew circles of position on the chart. “Now come back left those same ten degrees.”

When I returned to the screen after passing the message, I saw the bottleneck gap at the bottom of the channel about one hundred yards ahead, and we were on it. All we had to do was hold our present course. He’d set it up beautifully. We had almost reached the open water of Canal Franklin when we struck bottom. Hard. That sound is appalling. A high, hollow thunk with the pitch of finality about it.

Now I don’t want to seem an expert on groundings, saying that the sound causes every muscle in the body to contract simultaneously, adrenaline gushing. Then everything turns sharp-edged with a terrible clarity, and events slow as the crucial question ­– “How bad is it?” – floods in. Has the inrush begun? Are my feet still dry?

It took a moment, while the dreadful sound was still bouncing around the inside of the hull, to understand that Hamish was gone. I recalled a blur shooting up the companionway that must have been him.

I snatched a headlamp from a hook on the bulkhead above the nav station, scurried forward into the cold workshop compartment, and pulled up the floorboards to look for water. There was none; her innards were dusty dry. It would take a torpedo to hole Pelagic’s hull. But her hull hadn’t hit, I realised, because we were still moving, or more precisely because we hadn’t come to a spine-snapping halt. She’d run right over the rock.

I went topside. Kate stood clutching the wheel with both hands, eyes flashing in the red glow of the compass light, and when I clapped her lightly on the shoulder, she giggled and shook her head. The others were all crowded onto the foredeck, leaning outboard stabbing at the waterline with beams of white light as they moved aft, chattering, laughing at their own dark jokes, because they knew they’d find no holes, dents, or dings.

It was clear to us now what had happened. The keel had struck a deeply submerged rock, and the impact had kicked the keel back up into its box, as designed, harmlessly. Had the keel been fixed permanently to the bottom of the boat in typical fashion, one of two things would have happened, both bad. 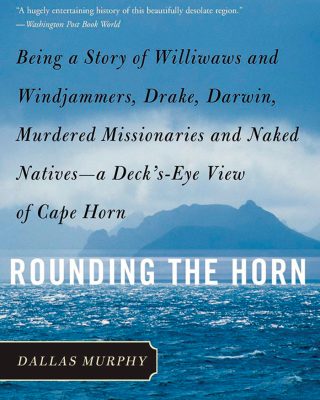 Rounding The Horn by Dallas Murphy is available from Basic Books, RRP: £9

“There was only one rock, right?” asked Hamish. “We only struck one.”

“You know what we should do, Kate? We should go back and find the rock with the keel and plot it on the chart.”

“Then we’d have the discoverer’s right to name it. Pelagic Rock… Sorry about that untoward bit, gentlemen.”

“You know, I’ve been through this pass a dozen times in daylight and never hit that thing. I was just ten feet one side or the other.”

“Where am I going?” Kate asked. “Could I have a heading, please?”

Calera Martial on the east end of Isla Hermite lay only three miles away across the narrowest part of Canal Franklin, but it took two hours before we had Pelagic securely attached to the bottom. Bleary-eyed but unready for sleep, we slouched around the ship’s table, and after passing a bottle of Bermudan rum, Dick proposed a toast to lifting keels.

The conversation shifted fluidly, fragmented and reformed, settling on near-disasters and marine absurdities we could laugh at because they were past. So I didn’t realise at first when Hamish was talking in his understated mode about this young Norwegian sailor called Jarli, a friend of his and Kate’s, that he was missing. It wasn’t going to be a funny story, we realised. We discontinued our own to listen.

Kate and Hamish had met Jarli in Ushuaia. He was just 18, and, Kate said, he looked like the Hollywood version of a Viking. In this 26ft cheap plastic boat powered by weak, blown-out sails and a tiny outboard mounted on a rickety stern bracket, he’d sailed down the east coast of South America to Ushuaia.

He meant to cross the Drake Passage bound for the Antarctic Peninsula in that toy boat ‘to see the birds and seals.’ He’d picked up a young California surfer dude, Dave, who had no sailing experience, hanging around the docks looking for adventure. After politely thanking old hands like Hamish and the Poncets on Damian II for their warnings against it, Jarli and Dave sailed south.

Six weeks passed, and when Pelagic returned to Ushuaia, Kate and Hamish searched the harbour and asked around town, but no one had seen Jarli. “You mean you think he’s dead?” asked Jonathan, right to the point. Hamish shrugged, paused, and said: “I wouldn’t want to cross the Solent in that bloody Clorox bottle.” Kate peered silently into her empty glass.

Up on deck, we saw black islands and the Magellanic Clouds, but the Southern Cross had set. There has of late been much talk in boating circles (and mountaineering) about responsibility, because if you go missing in other seas, someone is going to search for you, perhaps at risk to their own lives, and therefore you have a responsibility to your would-be rescuers.

You own the broad right to commit reckless acts in boats only if they don’t endanger others. Trouble is, people expect to be rescued. That wasn’t an issue down here. No one would launch a search for Jarli. A faint glow was visible in the east when we went below.