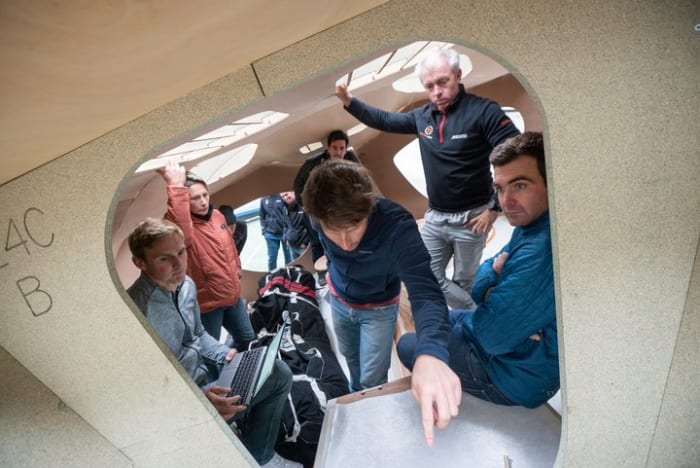 American ocean racing legends Mark Towill and Charlie Enright are spearheading another attempt at The Ocean Race, once again partnered with 11th Hour Racing. This time, however, they’ll be doing it in a purpose-built IMOCA 60.

In recent additions, The Ocean Race (formerly The Volvo Ocean Race) has been sailed by a one-design fleet of Whitbread 60s, VO70s or VO65s. However, the 2022-2023 will have two fleets—VO65s and IMOCA 60s. Notably, the IMOCA class is governed by a box rule, so rather than being identical, the boats will have significant variation between them. This means that boat design will become a huge part of race strategy.

IMOCA 60s are primarily known for being raced solo in events like the Vendée Globe, so fitting in five crew members and an onboard reporter will require some alterations to the typical plan. One such change is a cockpit redesign. Solo racers rely heavily on smart autopilot systems, which the Ocean Race doesn’t allow. This means the crews will spend more time hand steering and therefore need to swap the usual tiller for twin helms. “Thankfully we have a very supportive partner in 11th Hour Racing who has allowed us to stick to the original plan and vision, supporting an extra year’s worth of testing, trials, training and racing in the build-up to The Ocean Race 2022-23. It’s going to be an incredible journey,” says Team CEO, Mark Towill.

For 11th Hour, the tactical decisions have already begun with selecting top names in recent IMOCA history for their build. The boat will be designed by Guillaume Verdier whose other work includes America’s Cup winners and four of the last five Vendée Globe winners. MerConcept will be their technical and performance strategic partner. The boat will be built in Brittany, France, by CDK Technologies, builders of the past three Vendée Globe winners as well as the maxi trimaran Banque Populaire V.

In addition to speed, the team is focusing on sustainability with their build. Sustainability Manager Damian Foxall says, “from the outset as a team we decided we wanted to have a neutral impact on the environment but doing less bad is not good enough. We want to make all our areas of operation and influence net positive and regenerative.” To that end, they will be working with the IMOCA Class to develop sustainability standards for future builds and sharing resources with the rest of the industry to encourage others.