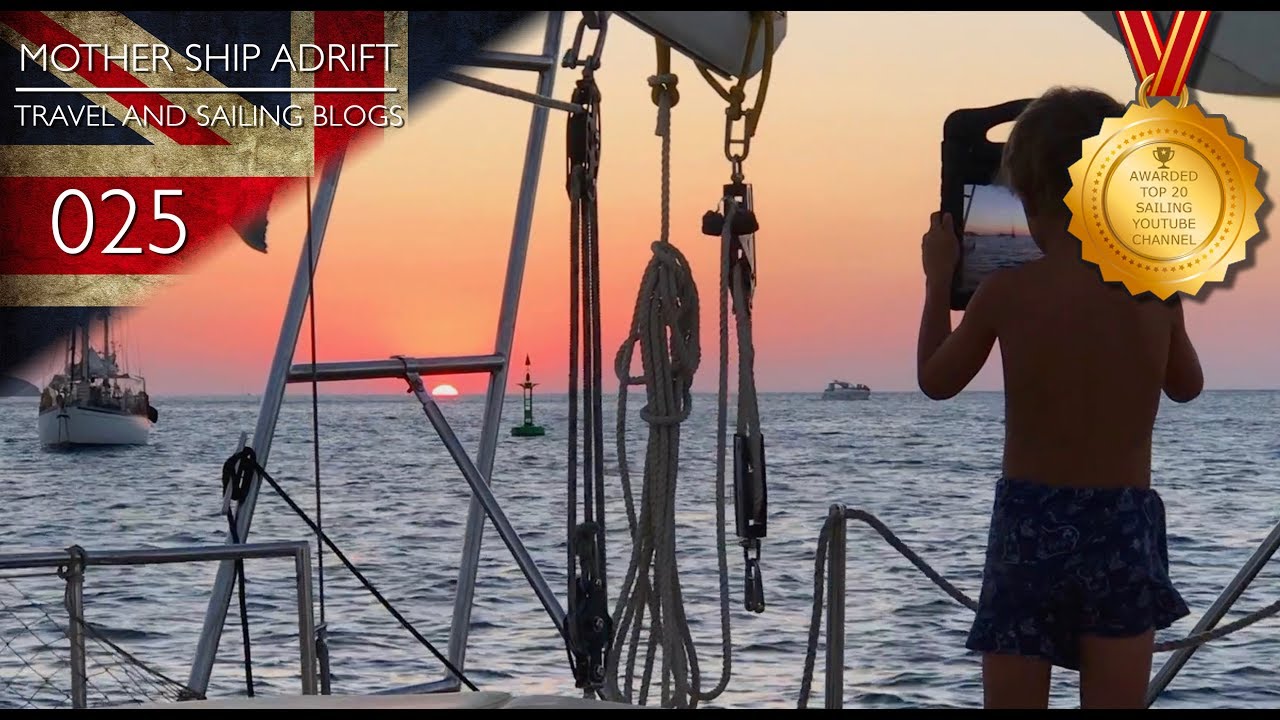 We’d been waiting several days in North Africa for the right weather window and were relieved when it came. Our Digital Yacht AIS is not transmitting and we still can’t trace the fault, so with a lot of marine traffic between Tunisia and Sardinia, we were keen to cross the shipping channels as quickly as possible in daylight.

As we approached Sardinia we realised we didn’t have an Italian courtesy flag so quickly cobbled one together from bits of other flags and hoisted it with the Q flag a few miles offshore.

The kids don’t eat much on passage – depending on the sea conditions – so when we arrive at our destination they’re always hungry and obsessively talk about food!

At Cagliari we anchored out but the swell was so bad we eventually opted for the marina which was quite expensive for us at €80/night and it was nothing special for that price.

We tried to check in at the Port Police and Customs – a task that’s difficult at the best of times but here they were closed altogether. We were told to go to the airport which was a train journey away – only to be told we didn’t need to check in at all! Bureaucracy at its best!

So we spent the rest of the day doing some window shopping and our daughter spent tway oo much time in Zara.

Butchers can also be tricky places in some countries and we were faced with wild boar piglets and nearly bought some horse meat for dinner!

We skipped along the south Sardinian coastline stopping at Pula Bay and other beautiful anchorages. It would have been nice to stay in Sardinia longer but because we stayed longer in Tunisia than expected, our timeframe for getting to the Balearics was limited,

We were caught out several times by unexpected storms large beds of Posidonia which meant the holding was pretty bad. The anchor dragged one night and we picked up a lobster pot! We also lost the dinghy, retrieving it with a well-rehearsed MOB procedure.

Eventually we found a sheltered bay hidden away from the mystral winds which friends had recommended – Tuerredda Beach – so we caught up with them and spent a couple of days on a beautiful beach with white sand and aquamarine water.

We also caught up with a bit of maintenance on the boat – re-mouse the lines on the solar arch and practicing poling out the headsail with the spinnaker pole, using an 18 year old Amel brochure as reference material!

We picked up extra crew – Alex – an old friend from the UK and when the weather was right – headed for the Balearics.

Keeping entertained on passage is always challenging and on this one we had a combination of knitting, audio books, cooking, GarageBand and war games to keep the boredom at bay.. and of course, boat schooling continued as normal.

The first place we hit land was a lovely bay in the southeast of Majorca. Nothing there apart from lovely white sand and.. nudists! But it was nice to get off the boat and build some sand castles. We stayed only to relax and catch up on some sleep before carrying on south to Ibiza.

The first thing we did was stock up on food and treats from the local Lidl. We’d been traveling for quite a few days so it was time to relax and watch the famous sunset in the bay of San Antonio

▷INSTAGRAM: https://www.instagram.com/mothershipadrift
Photos from the boat, the crew, the sea and other sailing families and characters!

▷FACEBOOK: https://www.facebook.com/mothershipadrift
Updates, photos videos and news as it happens!

▷AMAZON: https://www.amazon.co.uk/shop/mothershipadriftfamilytravelandsailingblogs
Products, spares and items we have on the boat!