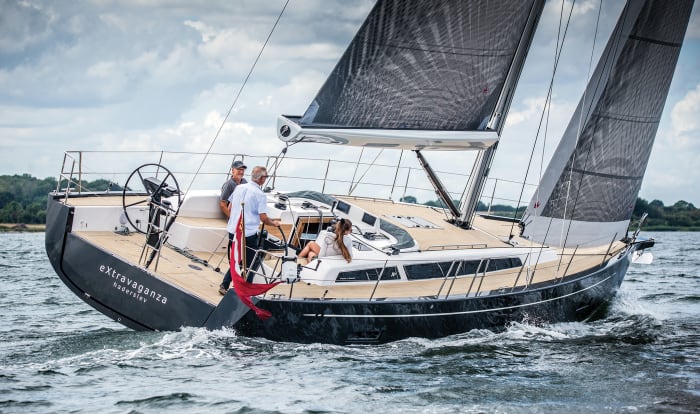 The Danish builder X-Yachts does not simply stick taller or shorter rigs and keels on the same hulls to create boats for both cruisers and racers, as some mass-production builders do. Nor is it content to build two distinct lines of cruisers and racers. Instead, the company has steadily developed three distinct lines of boats, following three closely parsed, yet unique design briefs: an “Xp” line of performance-oriented boats; an “Xc” line canted strongly toward cruisers; and a straight “X” line, which strives to split the difference. The new X4 model, measuring 44ft on deck, sits in the middle of this latter category boasting features that will appeal to a wide range of sailors.

Just as X-Yachts has been zealous in its design development, it is also unstinting in its construction practices, as is reflected in the new X4. The hull consists of a foam-cored fiberglass laminate set in vacuum-infused epoxy resin post-cured in an oven. The keel is a composite T-bulb structure, with a fin of cast iron supporting a lead torpedo bulb, all of it epoxy-coated and carefully faired. It is then bolted into a massive galvanized steel floor grid, an X-Yachts trademark, inside the hull. The boat’s overall hull form is relatively narrow by modern standards to reduce wetted surface area, with a plumb bow to maximize waterline length and just a hint of chine in the aft quarters.

The cockpit is entirely open, with a fold-down swim-step transom available as an option. Twin wheels sit directly behind a full-width mainsheet traveler recessed into the cockpit sole. The two wheels turn a single deep rudder. Each wheel is connected to its own quadrant with independent cable runs, creating, in effect, redundant steering systems. You need to cripple the nonredundant rudder itself in order to lose steering.

Forward of the traveler, you’ll find a fixed teak cockpit table with fold-down leaves. The bench seats to either side are enveloped by reasonably high cockpit coamings providing good back support. A double-ended mainsheet runs up from either end of the traveler to a pair of Harken Performa 46 winches situated directly in front of each helm station. Directly under the stations are a pair of deck hatches opening into a huge lazarette.

All control lines from the mast are led aft to another pair of Harken Performa 46s on the coachroof. On our test boat, only the portside coachroof winch, which handles the main halyard, was motorized. However, a full array of electric winches can be ordered.

Moving toward the bow, the boat’s foredeck is very much of the modern “naked” type. Control lines, as well as the jib’s Seldén furler drum, are all underground, and the athwartship track for the single-line self-tacking jib is recessed, the same as the main traveler. The only protrusions are a pair of coachroof handrails, which give you something to cling to as far as the mast. In keeping with the deck’s sleek profile, the cockpit dodger folds down neatly into a recessed storage channel forward of the companionway.

As on all X-Yachts, the interior of the X4 blends an appealing modern Euro-aesthetic with a traditional no-nonsense floor plan. The galley is at the foot of the companionway to port, with a head and medium-size nav desk to starboard. The saloon features two full-length straight settees that double as comfortable sea berths. The galley is well-thought-out, with a three-burner Eno stove and two Isotherm fridges: one top-loading, the other front loading. There is a fair amount of counter space inboard of the twin sinks. Storage space is more than sufficient.

The owner’s stateroom forward is appropriately fabulous, with a large island double berth, lots of storage and ambient light, and an ensuite head with separate shower. What’s really impressive, though, given the boat’s size, are the twin staterooms aft. These boast plenty of standing-up space, great vertical clearance over the berths and above-average ventilation. They are also quite versatile. In the port cabin, for example, you can order split single berths that fill in to form a double. In both cabins you can also order old-fashioned pipe berths (in place of an outboard shelf) to further expand your sleeping options.

Finish quality throughout is excellent, with skads of neatly executed wood-veneer trim. The standard interior wood is oak, with teak as an option. Cabin soles can be finished in straight teak, walnut or teak with holly strips.

Our test boat carried a standard aluminum three-spreader John Mast rig with an optional fiberglass furler boom. A full carbon rig is also available. Our laminated sails were owner-selected from Quantum, as opposed to the standard sails from either North or Elvstrøm. Forward we flew the standard self-tacking 97 percent jib. For a little more power you can order a 106 percent jib that sheets to a pair of inboard tracks to either side of the coachroof. Our test boat was also equipped with an optional bowsprit for flying A-sails and the like, but these were not needed, as during our test we enjoyed fantastic conditions with 14-17 knots of true wind.

You expect any X-Yacht to sail well, but I was still surprised at just how much I enjoyed sailing the X4. In fact, many X-Yachts dealers, you’ll find, are now hailing it as their favorite X-Yacht. This is a boat that is both taut and sweet, with superb helm feel. She falls easily into a groove, and though you do need to watch your mainsail trim to keep her on her feet as the helm can load up quickly, she remains easy to manage.

The boat is dependent on its substantial mainsail for much of its drive, so I made a point of trying her under main alone for a bit. She sailed well, tacked easily and made 3-4 knots at apparent wind angles (AWA) as tight as 45 degrees—more than sufficient for maneuvering through a mooring field. Once we unrolled the blade jib, things got downright lively. We made speeds into the high 7s close-hauled at a 35-degree AWA. Cracking off 20 degrees we gained a knot. On a beam reach we were breaking 9 knots. Falling off the wind we lost little momentum, sailing in the low 8s at a 120-degree AWA and in the high 7s at 140 degrees.

Our test boat carried a 57hp turbocharged Yanmar diesel turning an optional three-blade Gori folding prop. An 80hp powerplant is also available. A two-blade Flexofold prop is standard. In moderate chop we made 7.1 knots over the ground at 2,360 rpm. Our speed increased to 8.4 knots full out at 3,200 rpm. The boat turned crisply within its own length and backed down predictably. The engine’s sound insulation, I noted, was superb.

If you’re looking for a performance cruiser and have been toying with the notion of spending more money to get a really good one, this is the one to spring for. I’m with the dealers! This may be the best X-Yacht ever.