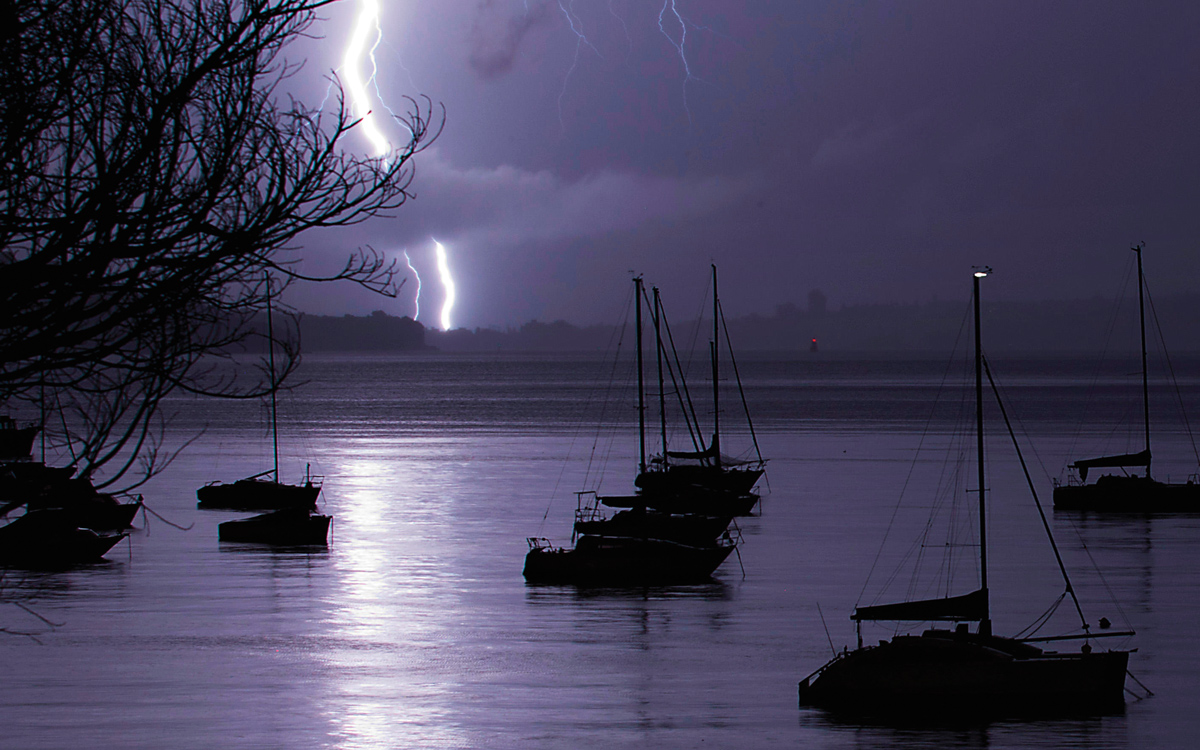 A lightning strike may sound vanishingly unlikely, but their incidence is increasing, and a hit can cause severe damage costing thousands of pounds, as well as putting an end to a sailing season, writes Suzy Carmody 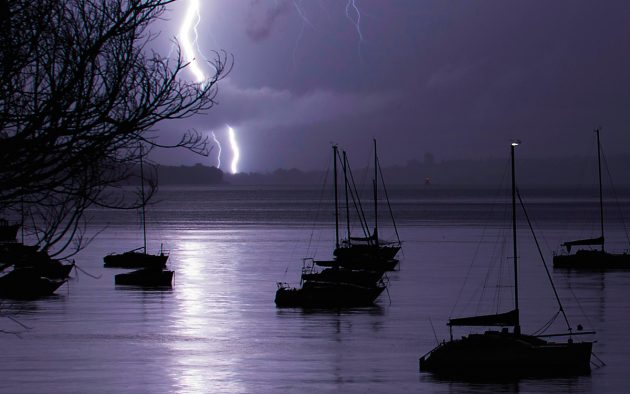 Lightning strikes of boats are still fairly rare – but are on the increase. Photo: Image Reality / Alamy


According to US insurance claims (from BoatUS Marine Insurance) the odds of a boat being struck by lightning in any year are about 1 per 1,000, increasing to 3.3 per 1,000 in lightning prone areas such as Florida. Pantaenius reports that while high-risk areas include the Caribbean, Florida and Mexican Gulf, the incidence in other areas is rising: “10-12% were in the Mediterranean, and that is coming from below 5% in the last decade,” explained managing director Martin Baum.

Pantaenius handles more than 200 cases of lightning damage every year. “Over the past 15 years, the total number of such loss events has tripled in our statistics. The relative share of lightning damage in the total amount of losses recorded by us each year is already 10% or more in some cruising areas such as the Med, parts of the Pacific or the Caribbean,” added Pantaenius’s Jonas Ball.

Both UK and US-based insurers also report that multihulls are two to three times more likely to be struck by lightning than monohulls, due to the increased surface area and the lack of a keel causing difficulties with adequate grounding. Besides increased likelihood of being hit, the cost of a strike has also risen enormously as yachts carry more networked electronic devices and systems. 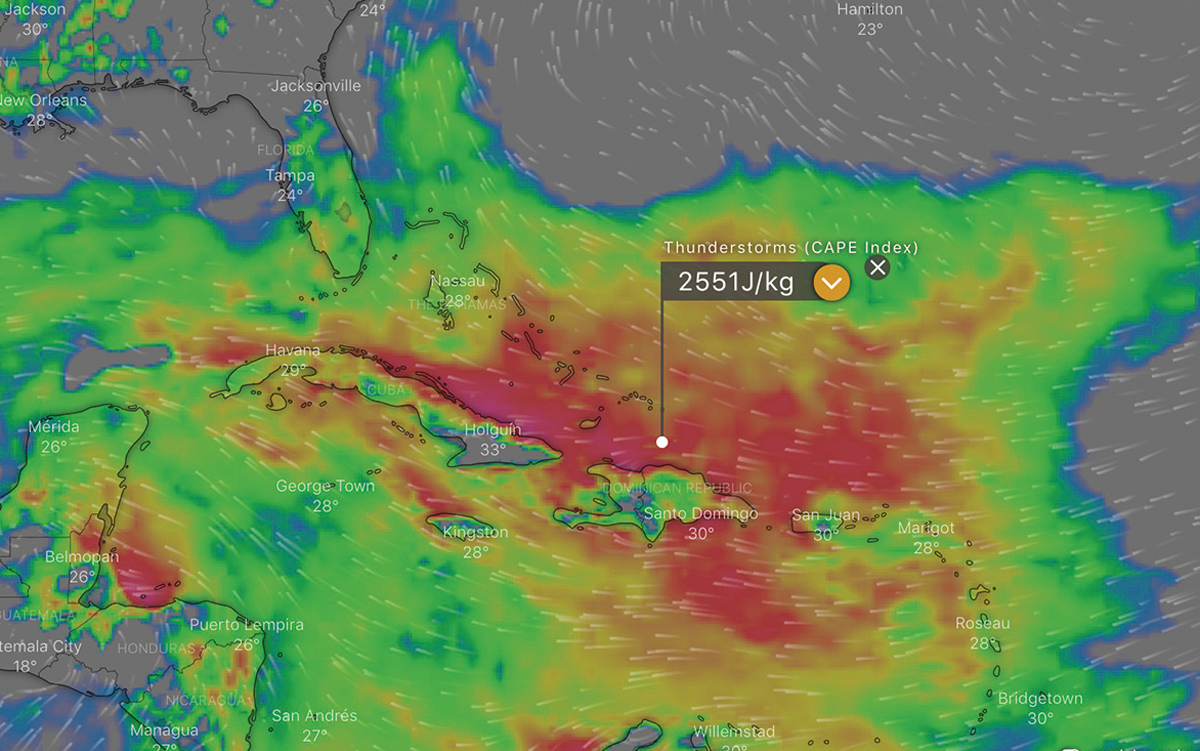 The CAPE index measures atmospheric instability and can be overlaid on windy.com forecasts

The only really preventative measure to avoid lightning is to stay away from lightning prone areas. Global maps of lightning flash rates based on data provided by NASA are useful to indicate areas of more intense lightning activity. They show that lightning is much more common in the tropics and highlight hotspots such as Florida, Cuba and Colombia in the Caribbean, tropical West Africa, and Malaysia and Singapore in south-east Asia.

Unfortunately, many of the most popular cruising grounds are located in tropical waters. Carefully monitoring the weather and being flexible to changing plans is an essential part of daily passage planning during the lightning season in high-risk areas. CAPE (Convective Available Potential Energy) is a useful tool for indicating atmospheric instability: you can check the CAPE index on windy.com (see above) as part of your lightning protection plan.

Yachts that had no protection when lightning struck often experience extensive damage. The skipper of S/V Sassafras, a 1964 carvel schooner, reports: “Most of the electronics were toast. Any shielded wiring or items capable of capacitance took the most damage: isolation transformer; SSB tuner; autopilot and N2K network Cat 5 cables.” 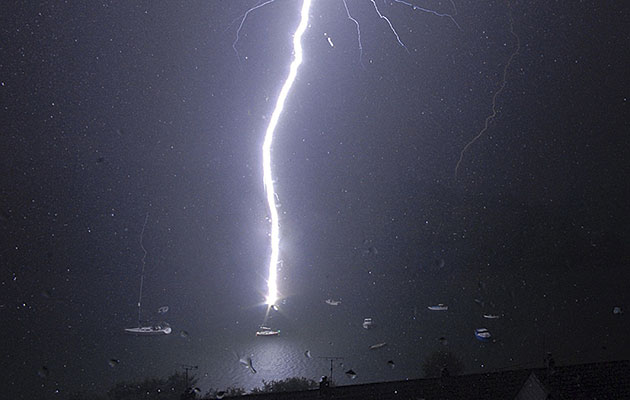 Earlier this summer we saw considerable thunderstorm activity over the UK and Europe, resulting in flooding and some serious injuries.… 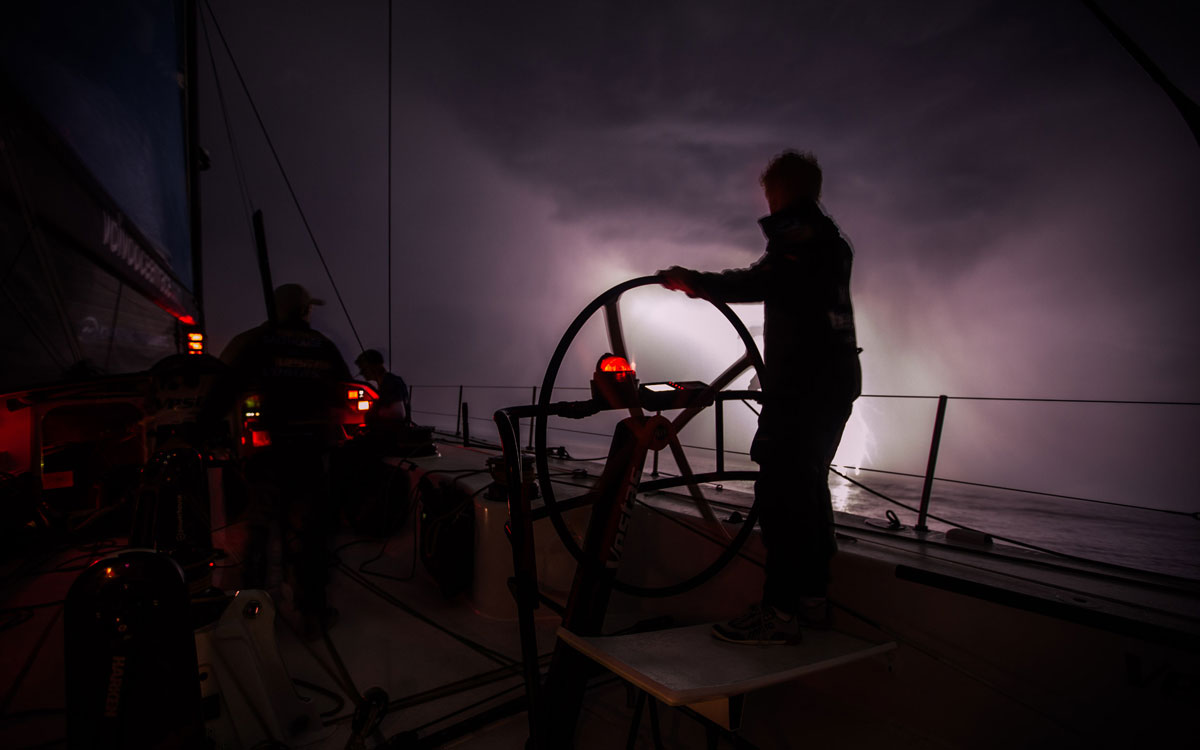 Lightning is the thing that scares me the most at sea. Having never experienced a lightning strike I think this…

The owner of Matador of Hamble, a Rival 41, recalls the effects of their strike: “The extent of the damage was not immediately obvious. For days afterwards anything with a semi-conductor went bang when we turned it on.”

The crew of Madeleine, a Catana 42S catamaran, had a similar experience. “We were struck in Tobago but only discovered the electrical damage to the port engine when we reached St Lucia and it was in the Azores that we found out the rudder post was broken and we had lost half our rudder.”

It therefore seems prudent that in lightning prone areas a protection system should be implemented where possible to protect the boat, equipment and crew. As a first step analysing the boat and the relative position of all the main metallic fittings can often reveal a few safe places to hide and places to avoid. Areas such as the base of the mast, below the steering pedestal and near the engine have the highest risk of injury. 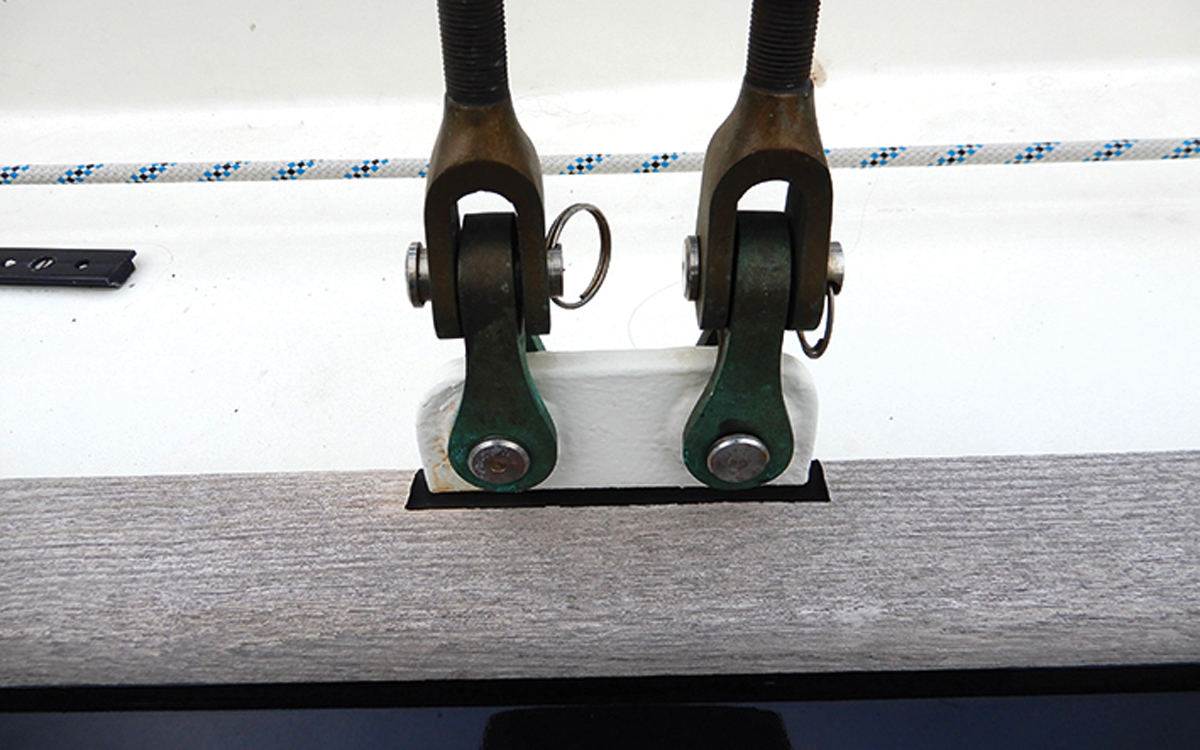 In terms of minimising the effect of a strike, one temporary method to limit the damage is to direct the current outside the boat using heavy electrical cables attached to the stainless steel rigging. With the other end of the cable immersed in the ocean, this provides a conductive path from the masthead to the ground.

The main flaw in this plan is that an aluminium mast has much greater electrical conductivity than stainless steel and is a more likely pathway to the ground. This system also requires adequate copper to be in contact with the seawater to discharge the current.

Other temporary measures include disconnecting radar and radio aerial cables, putting portable electronic items in the oven or microwave as a Faraday cage, turning off all the batteries or nonessential electronic equipment if at sea, or in a marina unplugging the shore power cord. All these procedures rely on someone being on board with several minutes warning before a strike to drop the cables over the side and turn off/disconnect and unplug. 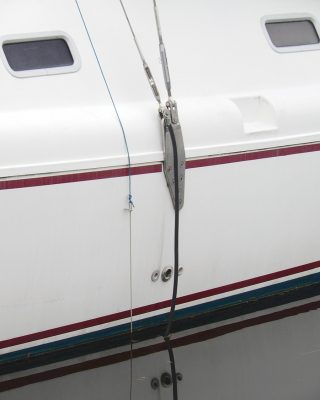 Cable used as a down conductor from the shrouds on a catamaran. Photo: Wietze van der Laan / Janneke Kuysters

Posting an ‘Emergency Lightning Procedures’ card in a central location of the boat showing where to stand and what quick preparations to take is a simple first step.

In a thunderstorm, molecular movement causes a massive build up of potential energy. Once the voltage difference overcomes the resistance of the airspace in between, invisible ‘channels’ form between the base of the clouds and tall objects like masts, providing a path for a lightning strike to discharge some of the accumulated electrical energy. There will be less damage to a vessel if the discharge is contained in a well-designed lightning-protection system.

Lightning rods or air terminals installed at the top of the mast connected to an external grounding plate on the hull, via an aluminium mast, provide a permanent low impedance path for the current to enter the water. On boats with timber or carbon masts a heavy electrical cable can be used as a down conductor.

If not installed during production, a grounding plate can be retrofitted during a haul out. On monohulls a single plate near the base of the mast is adequate. A ketch, yawl or schooner requires a vertical path for each mast and a long strip under the hull between the masts, whereas catamarans usually require two grounding plates to complete the path to the water.

The current from a lightning strike is dissipated primarily from the edges of the plate, so the longer the outline the better. Warwick Tompkins installed a lightning protection system designed by Malcolm Morgan Marine in California on his Wylie 38 Flashgirl:  “Two heavy copper cables run from the foot of the mast to the aluminium mast step, which was connected to a copper grounding plate on the outside of the hull via ½in diameter bronze bolts.”

The grounding plate was an eight pointed star shape. “Some liken it to a spider.” Warwick says, “And the very minimal electrical damage we experienced when struck was directly attributable to this spider setup.” 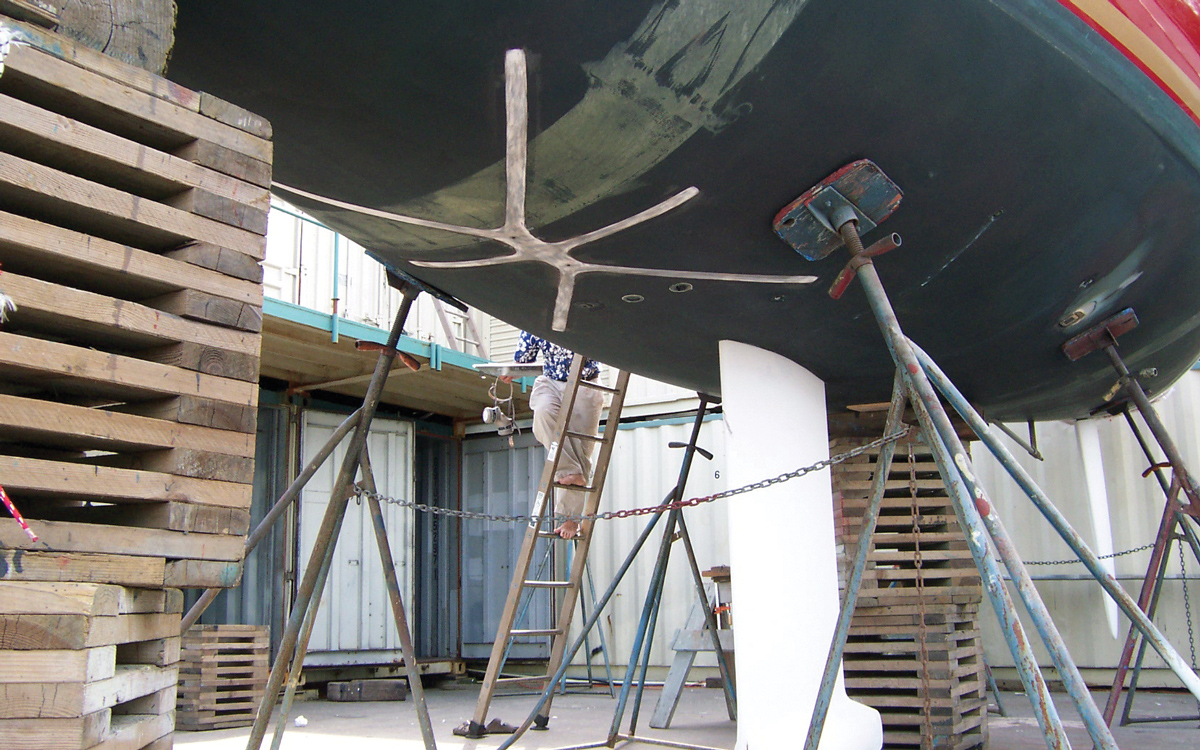 A copper ‘X’ grounding plate, used on boats that have a fin keel some distance aft of the mast. Photo: Malcolm Morgan Marine

An internal bonding circuit connects the major metal objects on a boat to the grounding plate via bonding cables. This can help prevent internal side strikes where the current jumps between objects in order to reach ground.

Morgan explains: “As modern boats are becoming increasingly complex careful consideration is required to ensure the bonding system is designed correctly. There are five possible grounding systems on a vessel (lightning protection, SSB radio ground plate, bonding for corrosion, AC safety ground, and DC negative) and all need to be joined at one common point and connected to the external grounding plate.” 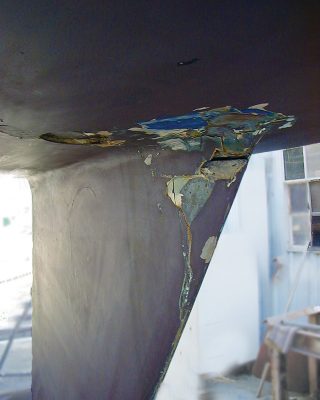 This strike exited through the keel, blowing off the fairing and bottom paint. Photo: GEICO / BoatUS Marine Insurance

Yachts anchored close to shore or on shore power in a marina are susceptible to voltage surges during a thunderstorm. If lightning strikes a utility pole the current travels down the electricity cable looking for ground. It can enter a vessel through the shore power line or can pass through the water and flashover to a yacht at anchor.

Surge-protective devices (SPD) are self-sacrificial devices that ‘shunt’ the voltage to ground. They reduce the voltage spikes eg a 20,000V surge can be diminished to 6,000V but the additional current can still be enough to damage sensitive electronics. Therefore fitting ‘cascaded’ surge protection with several SPDs in line on critical equipment is a good idea.

Theoretically, if a lightning dissipator bleeds off an electrical charge on the rigging at the same rate as it builds up it can reduce or prevent a lightning strike. Lightning dissipators such as ‘bottle brushes’ are occasionally seen on cruising boats, though these are relatively old technology. Modern dissipators feature a 3⁄8in radius ball tip at the end of a tapered section of a copper or aluminium rod. The jury is out on their effectiveness.

A more high-tech solution is Sertec’s CMCE system, which claims to reduce the probability of a lightning strike by 99% within the protected area. The system has been widely installed on airports, stadiums, hospitals and similar, but has now been adapted for small marine use (and may reduce your insurance excess).

Arne Gründel of Sertec explains: “The CMCE system prevents a lightning strike by attracting and grounding excess negative charges from the atmosphere within the cover radius of the device. This prevents the formation of ‘streamers’, and without streamers there is no lightning strike.” 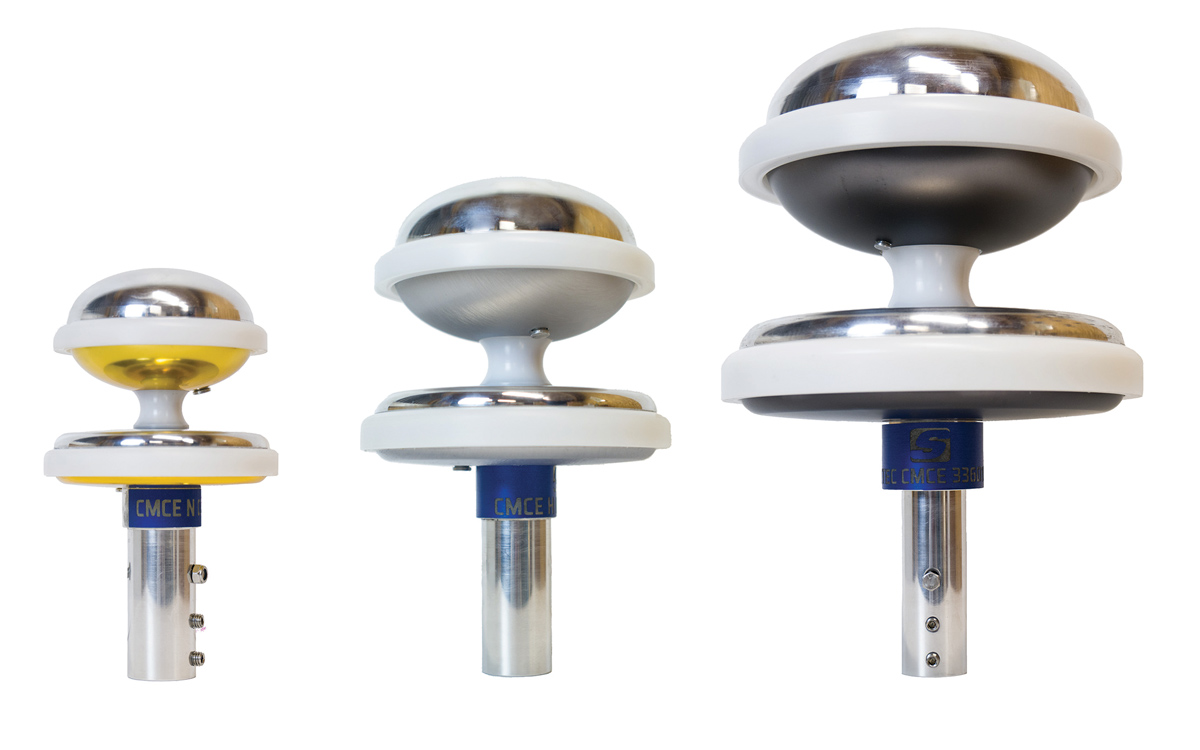