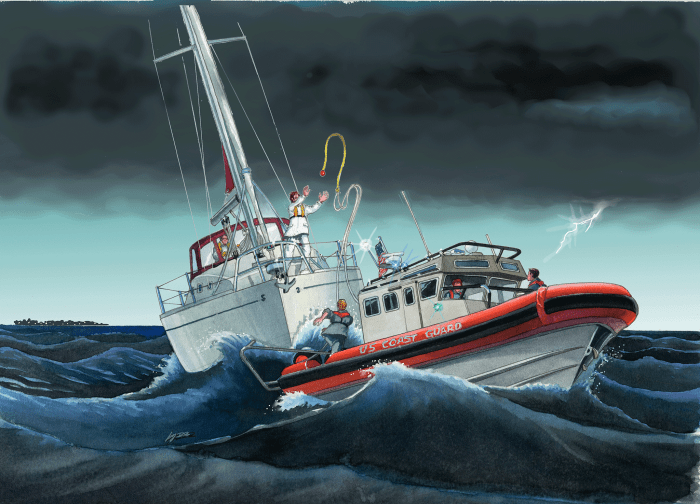 We left Myrtle Beach, South Carolina, at 1230 on a Friday. My husband, Hugh, my brother-in-law, Jim, and I were sailing overnight to Charleston. The early November weather was lovely and warm, with the forecast calling for light winds, mostly out of the south-southwest. We expected to motor at first and, hopefully, sail later. As we left Little River Inlet, we had a pod of dolphins visit for about 30 minutes. We were soon making such good time we had to slow down to avoid getting into Charleston too early the following morning.

As the day progressed, we noticed a bit of a light show as some thunderclouds settled in, sitting just above the horizon to the east. Come evening, we also saw lightning ahead. Eventually, it started to rain, and as the wind built, our progress slowed to a crawl. There was nowhere to go to avoid it. Slowly, we pressed on, the rain, wind and lightning all increasing as the storm passed overhead.

At 0108 we received a direct hit from a bolt of lightning. I was at the helm. The crash was deafening. As the sky went white and gold, we were suspended in a strange dimension for what seemed like minutes. After that everything went silent. Nobody moved. I don’t think any of us could. As quickly as the sky had gone white and gold, it went black. Moments later we checked to make sure everyone was OK. Everyone was, though scared—shocked, literally—by the awesome power of what had just happened.

Alas, Simplicity, our Beneteau Oceanis 381, did not fare so well. The engine alarm was now blaring, and the engine was dead. We’d lost our navigation and steaming lights. The wind meter was going crazy. Soon, it quit. The fixed-mount VHF in the nav station was out, though, oddly, our stern light remained lit. Partially unfurling the jib, we sailed along as best we could.

Using a handheld VHF we tried contacting the Coast Guard. We were about 35 miles north of Charleston and approximately six miles offshore with no cell phone service. Finally, we got a response, though it was difficult communicating as our transmissions were garbled. We asked for assistance and let them know we were Gold-level BoatUS customers. We added that we needed a tow, as the wind and waves were building and on the nose. The Coast Guard advised us it would be a good three hours before a boat would be able to reach us, so we began tacking back and forth, trying to make whatever progress we could to windward.

As we were doing so, we noticed we now had smoke in the saloon. Hugh immediately grabbed a fire extinguisher and put out a small engine fire that had sprung up near the alternator. That done, we called the Coast Guard again to update them on this latest development. They asked for details, and Hugh verified there are no other issues. We opened up a few of the deck hatches to clear the smoke. Hours later, though, we could still taste it in our throats.

Checking back with the Coast Guard, they told us they were dispatching a boat to come get us. The plan was for it to take us as far as the jetties at the mouth of Charleston Harbor. The BoatUS boat would take over from there.

Around two hours after the lightning strike, I saw a green light off in the distance. Hugh got out the binoculars and said it was a small sailboat also sailing under jib alone. We hailed the other boat on VHF, but to no avail as the other skipper approached and started circling—much too close as far as I was concerned. We shone our spotlight in his direction, and he yelled at us to stop blinding him. When we yelled over for him to turn on his VHF, he said he didn’t have one. Unbelievable! He asked if he could help out. We told him, no, that the Coast Guard was on its way.

A short while later, we checked in with the Coast Guard again, as we had yet to hear from the boat coming to assist us. The dispatcher said it was on its way, and that we should expect to hear from them shortly. Soon afterward, they radioed to ask for our GPS position and compass heading. They also said they had a set of blue lights turned on and asked if we could see them. At first, we thought the lights we saw were from the same big boat with a spot beam and blue lights we’d seen earlier. But it proved to be a Coast Guard 40ft response boat. Now that they were on the scene, we backwinded the jib and hove-to. The seas at this point were 5ft and building, the wind 25 knots or more.

As the response boat drew nearer, the crew asked if we’d prefer sailing the rest of the way to Charleston with them accompanying us. Hugh, Jim and I all just looked at each other and said, no, we’d prefer a tow. After that, they started coming in closer to pass us a line, while Hugh, safely tethered in, went up onto the foredeck to catch it. Their first attempt had to be abandoned, due to the wind and waves. However, their second try at throwing us a red ball with a yellow line attached to two tow lines was a success. Hugh quickly attached the line, the Coast Guard checked his work and Hugh went belowdecks to warm up a little while I remained at the helm, the temperature having now dropped dramatically.

We remained under tow for about six hours, hand steering the entire way. Finally, around daybreak, we sighted the jetties leading to Charleston Harbor, where the Coast Guard handed us off to BoatUS. A short while later, as we were approaching the marina, the senior Coast Guard officer aboard the response boat and her mate boarded Simplicity to do a quick inspection. First, they checked to see we were all doing OK and that we all had our PFD’s on. Next, they went down into the saloon to confirm our fire extinguishers, boat documents and flares were all in order. They seemed genuinely concerned for our well-being and were very professional.

After that, BoatUS towed us the rest of the way to Charleston Harbor Marina and put us into a slip, where I immediately went below and called our insurance company. Unfortunately, though it was a Monday, it was also a holiday, and the office was closed, so I had to be content with leaving a message.

The next day, I got a call from both the insurance company and a marine surveyor who said he’d be coming around the day after that. He arrived punctually and told us he’d been doing surveys for over 40 years. It was the first time I ever saw a 70-year-old go up the mast. We’re now in the process of finding the right contractors to repair Simplicity. I’m thankful our crew was not only unharmed but managed the ordeal with calmness, grace and care.

What we did right

• Made sure to wear our life jackets

Got a good story to share? Send it to sailmail@sailmagazine.com