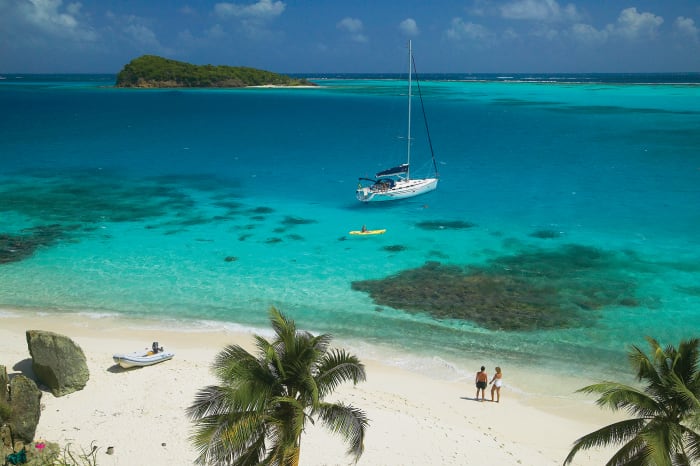 I’m a week away from having to get tested for Covid-19. I dread it. I’ve heard it’s like a brain swab, but less fun. Nevertheless, I have to get one, because I’m about to go on my first charter since the start of the pandemic.

At press time, the Bahamas had entered Phase 2 of its recovery, having officially opened up again on July 1. The government is requiring the completion of an online health visa application, temperature-taking upon arrival at the airport, masks and a negative Covid-19 result from a test taken no earlier than seven days prior to entry. Given the long wait times for results, it’s a tight squeeze. Still, Dream Yacht Charter has provided us a Bali 4.5 out of Nassau for the last week of July, so I’m willing to be impaled. Also open for business in the Exumas are The Moorings and Sunsail.

Although nothing moved in the Med, the Caribbean or the South Pacific throughout March, April and most of May, as I write things are starting to ease up a little. It seems the situation continues to change daily, and international travel remains very much a guessing game, so be sure to check for the latest. Nonetheless, there are now plenty of places to start booking charters again.

The British Virgin Islands, for example, closed its doors along with the rest of the Caribbean in spring. However, the plan is to reopen to tourists in September, and the many charter companies there, including Horizon Yacht Charters, BVI Yacht Charters, DYC, Conch Charters, TMM, The Moorings and Sunsail are all planning on welcoming sailors back this fall.

Further south, Grenada, another Horizon Yacht Charters destination, was planning on opening again in mid-August for tourists from Canada, the UK and some European countries, but not the United States. Fingers crossed, by the time you read this, travel restrictions there will have eased up for U.S. charterers as well, so be sure and check if you have any interest in exploring this outstanding cruising ground. Elsewhere, The Moorings has listed base openings for St. Lucia and St. Martin as of August 1 and October 1 respectively. Similarly, Sunsail is offering boats in Tahiti, and Horizon is offering up boats in St. Vincent.

Meanwhile, the U.S. Virgin Islands, including St. Thomas, St. John and St. Croix, opened their doors to tourism on June 1, and CYOA and Virgin Island Yacht Charters are both offering boats out of St. Thomas. Chelsea Petraitis of DYC says its base in Fajardo, Puerto Rico, is also open for those interested in visiting the more sparsely populated Spanish Virgins. Another chartering option in this part of the world is Sail Caribe. “There are no restrictions here for Americans, although a negative [Covid-19] test is needed to enter,” Petraitis says.

Unfortunately, though Croatia and Greece have opened up for summer charter traffic, with DYC, Navigare and The Moorings all scheduled to be on the water by August 1, traveling to Europe remains problematic. When they first opened for business again, many companies did so only to those who could drive to the bases since flying was still sketchy. At press time, the EU had basically banned all American tourists as well.

On a happier note, closer to home, chartering in the United States is actually up, with plenty of opportunities to get on the water in places like the Chesapeake Bay, Pacific Northwest, Southwest Florida and the Great Lakes. Anacortes Yacht Charters, for example, is once again chartering boats in San Juan County. Similarly, places like Michigan’s Great Lakes Sailing Co., DYC’s Annapolis base and Southwest Florida Yachts are also all open for business, with a variety of boats available.

Like most businesses, charter companies everywhere found themselves looking for ways to conserve cash during the downturn, which in some cases resulted in not processing refunds. By way of compensation, many of them are now offering free re-bookings and discounts on new charters in an effort to entice sailors to return. Many companies are also waiving change fees and scheduling charters well out into 2021. In other words, travel issues aside, there’s never been a better time to book your dreamboat.

That said, in terms of availability, a number of charter companies told me they are already noticing an uptick in demand in the Caribbean and the Bahamas for late 2020. So if you want your choice of boats, the time to book may be now. Same thing if you want to sail to Dubrovnik in Croatia or Mykonos in Greece next summer. Consider locking in a date quickly, since, in addition to normal summer demand, there will also be this year’s re-bookings to accommodate.

Again, all of the above is subject to change. Nonetheless, assuming I pass my test, I’ll soon be writing about the sweet sound of wind in the rigging again. Stay tuned.